Winter time in the Gorge is one of those unique times where you often have to be at the right place at the right time for the special shot you are looking for.  For instance, I usually don't do a lot of waterfall shots in winter time because the light is often not ideal and there's not a lot of green to give contrast to the grays and browns that tend to dominate the woods.  On occasion, it is possible to get some interesting shots.  I was driving down the Gorge this week and thought I might try a shot or two of the Rocky Broad in a particularly turbulent section, just to see what it might yield.  The result was sort of cool. 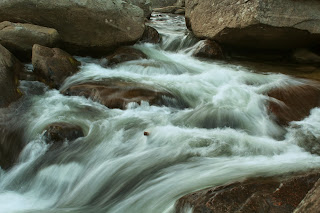 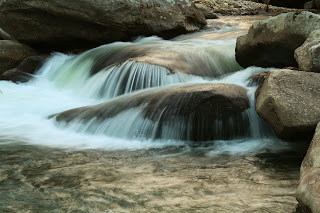 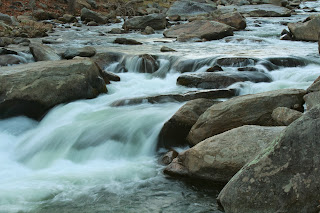 The lighting sort of created an almost cartoony effect, which I found to be quite interesting.
Sometimes the silky effect (blur) on water can be over-used to a degree, but it is a technique I have been working hard to try and master and in these shots, at least from my amateurist point-of-view, it worked for what I was trying to do.  Sometimes shots create themselves.

I have been fortunate at other times to be able to get some shots that probably few have ever had the opportunity to even attempt, again because I was simply at the right place at the right time.

Even though Hickory Nut Gorge is most famous for its river, its falls, its rocks and its wildflowers, there's something about the winter that creates a unique perspective of the Gorge.  If I don't get to post anything else before Christmas, I hope everybody has a Merry Christmas and a happy New Year.  If these pictures don't get you in the holiday spirit, perhaps this little cartoon will. 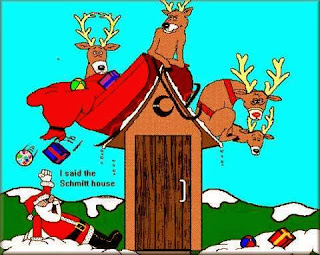 Posted by Clint Calhoun at 5:23 PM