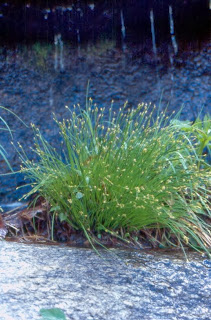 Deerhair bulrush (Trichophorum cespitosum) is a species native to Hickory Nut Gorge that you might say doesn't quite belong here.  A member of the Sedge Family (Cyperaceae), it is named for the hair like tufts at the tips of each grass-like stem.  The tufts are actually the flowers of the plant.  Deerhair bulrush is what we call a disjunct species; a remnant of an age gone by...an Ice Age in fact.

In its typical range, deerhair bulrush occurs in boreal and polar regions, mainly in bogs in the Canadian and Old World tundra.  It occurs in rocky areas above timberline in the boreal zone of the U.S. and Canada, but it is also found right here in good ol' North Carolina.  Above 5,000 feet, North Carolina forests are boreal, dominated by red spruce and fir.  During the last Ice Age, all of the Southern Appalachians forests were most likely boreal forests and composed of species that are more typical of that ecological community.  As the global temperature warmed after the Ice Age, the forests of the Southern Appalachians began to change as new species came to dominate and certain ecological communities were pushed into stronghold areas where they could continue to persist.  This is why there are still hold out pockets of boreal forest still found in North Carolina and Tennessee.  This boreal community is where you would typically find deerhair bulrush.  It tends to be found in places like Grandfather Mountain, the Black Mountains, Devils Courthouse; places that still mimic the conditions of the former age.  So we might ask ourselves, why do we have it in Hickory Nut Gorge?

Deerhair bulrush, while preferring to be associated with relic species like itself, in some places it got left behind, so to speak.  Those areas tend to be steep, wet, north-facing slopes at lower elevations, typically around 1,100 feet above sea level.  In those areas, the boreal forest is gone.  Trees such as spruce and fir, because of their size could not be supported on steep rock faces which are meant for smaller species, even though the microclimate would likely support them.  These steep rocky areas, because of their north-facing aspect, close proximity to water (either from seepage or spray from waterfalls) provide ideal conditions for survival.  One of the things these areas have in common with colder climates is the presence of ice in the winter time.  On north-facing slopes of Hickory Nut Gorge, once ice forms and builds up, it's there until spring.  This long-term presence of ice lowers the temperature in the immediate area creating a distinct microclimate that allows deerhair bulrush to thrive.  Deerhair bulrush was first discovered in Hickory Nut Gorge up on Sugarloaf Mountain.  It was later found in Chimney Rock State Park in several seepage and spray areas such as Nature's Showerbath and Groundhog Slide on the now closed Cliff Trail, and at the base of Hickory Nut Falls in the spray zone.  In fact, up until the mid-90's, Chimney Rock State Park was the lowest known location in terms of elevation for deerhair bulrush, until it was discovered at a slightly lower elevation in Table Rock State Park in South Carolina, growing in a spray area near a waterfall.

Deerhair bulrush, because it is a relic of a former time, makes for an interesting study case.  It provides some insight into what conditions may have been like in North Carolina during the last Ice Age.  Its presence also helps us to understand the effects of global climate change, a naturally occurring phenomenon (I'll leave the political debate to those who debate such things) and what the impact may be for not only this, but other species as well.

Posted by Clint Calhoun at 3:43 PM