Spring has arrived!  The forests of the Southern Appalachians and North Carolina are waking up from their winter slumber.  The birds are singing, pollinators are buzzing around, and spring ephemerals are popping up, taking advantage of the warm sunlight hitting the ground in advance of the shade that will come as canopy trees bring on their leaves.

Spring marks the time of year when three interesting tree species make their floral appearance.  Not only are they ecologically important, but their symbolism of spring is rooted deeply in Southern Appalachian tradition and folklore; tradition that in some cases extends back to the Old World before white settlers came to America.  For early settlers, these trees held significant religious connections that would be passed down for generations.  Something I find interesting is how these three species, while coming from different plant families, could be so closely related in historical folklore.  So let's find out a little more about these interesting trees.

Serviceberry (Amelanchier sp.), also known as shadbush, is a small tree or shrub that generally grows only about 15 to 20 feet in height.  It is one of the first things to bloom in the understory of the forest, taking advantage of the lack of leaf canopy in the first couple of weeks of Spring.  It's five-petaled, white flowers easily stand out against the dark gray backdrop of the surrounding forests.  Serviceberry is notable for its edible fruits which can be used in jellies, jams, and pies.  It provides a fantastic food source for birds, and browsers such as deer and bear.  Serviceberry is a member of the Rose Family and from a distance might look similar to Bradford pear to the untrained eye.  Of course Bradford pear is an ornamental relative, also in the Rose Family, but certainly less desirable due to its invasive nature. 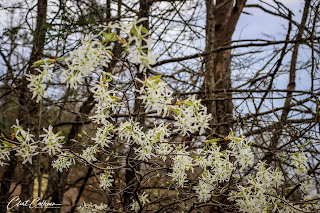 Serviceberry gets this popular common name from a time that dates back to circuit-riding preachers.  It would start to bloom, usually after the last snows had fallen in the Southern Appalachians, making travel easy for the circuit-riders as they would pass through mountain communities, preparing for the seasonal community church services.  Those early settlers called it the "sarvis tree" as it bloomed just in time for the "sarvis."  Some less knowledgeable folks might say that these were ignorant hillbillies who didn't know how to properly say "service," but if you have studied the Southern Appalachian dialect, you would know that this pronunciation is more in line with pure Elizabethan English, brought over from the Old World by the Scots-Irish and English settlers.  This dialect is still prevalent in the Southern Appalachians today, thankfully, due in large part to the continued isolation of mountain communities from the rest of the less-accented world.  This slight digression aside, it's important to point out that even today, old folks still refer to serviceberry as "sarvis" or "sarvis tree," so its really interesting how this historic common name has managed to persist. 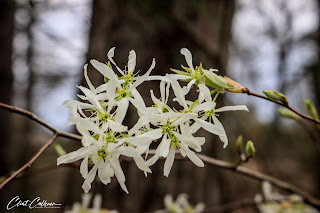 Now these church services would have started occurring around the time that Easter was celebrated, so once you got to church to hear the circuit-riding preacher bring the "sarvis," it would have been very likely that the preacher's first sermon may have pertained to the subject of Easter (interestingly enough, Easter is a pagan holiday that found its way into Christianity and became incorporated into Christian tradition).  Quite possibly the preacher would have talked about the hours leading up to the crucifixion of Christ and the betrayal of Jesus into the hands of the Pharisees.  That brings us to the next species, the eastern redbud, a.k.a. the Judas Tree.

Eastern redbud (Cercis canadensis) is a member of the Pea Family.  This small tree is often spindly and seldom grows taller than around 30 feet.  Redbud's five-petaled, pea-like, pink and magenta flowers offer a stark color contrast to the gray and light green of the forest as leaves begin to break through their buds.  Redbud favors sunny areas on hillsides and forest edges.  More recently, redbud has become appreciated for its strong tolerance to air pollution and is often used as a streetscape plant.  Redbud produces pea-like fruit similar to those of black locust, but rather than a compound leaf, as seen with most members of the Pea Family, redbud has a simple, heart-shaped leaf, giving it an attractive look even after the flowers are gone.  The flowers lack fragrance, but are attractive to pollinators, specifically certain types of bumblebees. 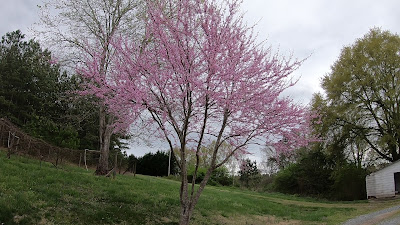 Eastern redbud is also called Judas tree.  This is due to its similarity to its Eurasian counterpart, Cercis siliquastrum, which looks very similar and shares the same common name.  Cercis siliquastrum occurs quite frequently throughout Israel and the Holy Land, and according to tradition, is the tree from which Judas Iscariot hanged himself after his betrayal of Jesus.  Oral tradition has it that this tree was as mighty as an oak and originally bloomed white, but because Judas had the "blood of Christ" on his hands due to his betrayal of God's son, the tree's flowers turned red as blood.  Many versions of the myth state that the tree was so embarrassed by Judas' heinous act that it blushed, it's flowers turning from white to pink.  The myth goes on to further state that God, because of Judas' traitorous act and his compassion for the tree, changed the stature of the once mighty tree so that it would no longer be suitable for hanging another human being. 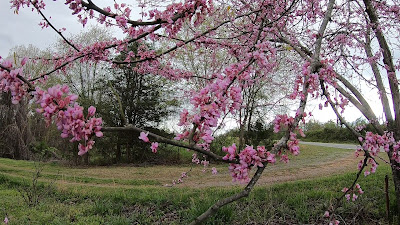 Coincidentally (or not), eastern redbud blooms around the time Christians typically celebrate Easter (mid-March to mid-April).  Certainly, those circuit-riders would have been familiar with this oral tradition and would likely have had plenty to say about Judas' role in the crucifixion of Jesus and the part that this tree played.  This would have then allowed the preacher to segue into another lesson on the crucifixion and Christ's redemption of mankind by using yet another tree as an example: the flowering dogwood.

Flowering dogwood (Cornus florida), or dogwood for short, is one of three Cornus species found in the Southern Appalachians, the other two being alternate-leaf dogwood (Cornus alternifolia) and silky dogwood (Cornus amomum), neither of which comes close to being as beautiful as flowering dogwood.  The distinctive feature of this diminutive tree is the four showy bracts that subtend the actual inflorescence and are often mistaken for petals.  Flowering dogwood is the North Carolina state flower due to its wide distribution throughout the state and popularity as an ornamental.  It's occurrence throughout the Southern Appalachians makes it a favorite springtime species.  Flowering dogwood typically reaches an average height of around 30 feet in ideal growing conditions.  It can be found in varied forest communities, but is particularly prolific near forest margins where it also seems to put on the best show as far as the flowers are concerned.  The showy bracts encircle a cluster of approximately 20 small flowers, each with its own male and female floral parts.  The fruits develop in late summer and turn red in the fall, attracting various birds that feed on the fleshy fruit and distribute the seeds. 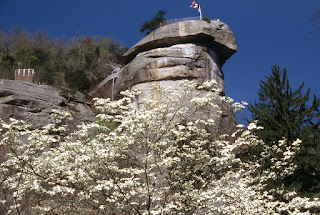 In recent years, flowering dogwood has shown significant susceptibility to the fungus Discula destructiva which causes dogwood anthracnose.  This non-native fungus has significantly diminished dogwood populations across the extent of its range, particularly in higher elevations where forests tend to have higher humidity and are more conducive to fungal growth. 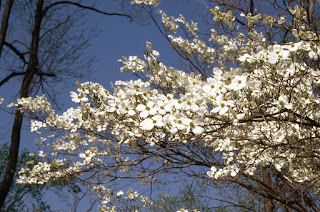 The Legend of the Dogwood follows a parallel story line to that of the redbud, and it may be that the legend was derived from the mythology surrounding the redbud, given the very similar details.  The authorship of this Southern Appalachian legend is unknown, but the story basically says that, like redbud, the dogwood was once a mighty tree; strong, and used for producing building materials.  According to the legend, the Romans used the wood of the dogwood tree to make the cross upon which Jesus was crucified.  As such, God extended both a blessing and a curse upon the tree to serve as a reminder of the deed that had been committed against His Son.  God cursed the dogwood to forever grow small, removing its former strength so that it could no longer be used for crucifixion.  At the same time he blessed the dogwood with beautiful flowers that would serve as a reminder of the sacrifice Jesus made on the cross for all of humankind.  The four white bracts are in the shape of the cross.  The notches at the tips of the bracts are dipped in the blood of Christ and represent where Jesus' hands and feet were nailed to the cross and where his head, adorned with a crown of thorns, rested against the top of the cross.  The flower cluster in the center of the inflorescence represents the crown of thorns and Jesus' standing as the King of Kings.  Lastly, the tree was made to bloom at Easter, when Christians celebrate the resurrection of Christ. 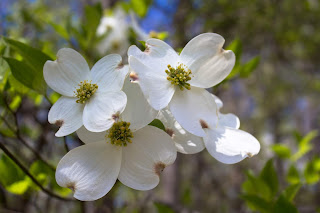 It should be noted that Cornus florida is not a native species to the Middle East, but rather is a North American species.  Neither the Bible or any other historical writings from that time period make any mention of the type of wood that the Romans used to make the crosses used for crucifixion, so this leads us to believe that this legend is purely American in origin.  It's certainly a possibility that one of those circuit-riding preachers is responsible for the development of this legend, seeking an easy comparison and parallel to that of the redbud.  A preacher who had any knowledge of this legend would have certainly taken the opportunity to re-tell this story, in hopes that the local congregants would come to salvation.

To say that these tree species' traditions relate only to Christianity would be an incorrect assumption.  Before white man settlement in the New World, native Americans used all three of these species medicinally for various ailments.  Some of those traditional uses would be picked up by Southern Appalachian "granny" women as part of what some would deem as mountain witchcraft.  Such was the way of the residents of the Southern Appalachians as they held tightly to both Christian beliefs and Old World pagan traditions.  Such beliefs were crucial to survival in a land that could be inhospitable in the worst of times and bountiful in the best of times; when oft-times it was necessary to rely on both faith and traditional knowledge and ways.  Being isolated meant that there were seldom doctors very close by, so reliance on potions, charms, and Old World medicine were as important as the spiritual healing and hope of salvation that circuit-riding preachers brought to the people of the Southern Appalachians.

While COVID-19 may be stifling much of our normal activity, it shouldn't prevent us from going outside and getting some fresh air, provided that we maintain safe personal distancing protocols and avoid areas where large numbers of people could congregate.  If you get the opportunity, look for these three tree species.  Aside from their seasonal beauty, hopefully you will have a new perspective and appreciation for these fascinating native trees.  I hope you enjoyed this exploratory journey, blending science, history and a little bit of spirituality.

Posted by Clint Calhoun at 8:53 PM No comments: