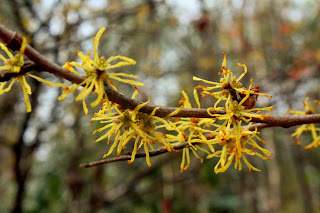 Witch-hazel (Hamamelis virginiana) is a fairly common shrub of the eastern United States.  It is a very fascinating shrub.  Witch-hazel is a deciduous shrub that grows to around 6 meters in height.  It gets the distinction of being our latest blooming plant.  Flowering begins around early November and extends into mid- to late-December.  It is readily visible due to its bright yellow, string-like petals which contrast strongly with the drab color of the forest after the leaves of other species have fallen to the ground.  After flowering, the witch-hazel fruit will take nearly a year to mature.  Once mature the fruit explode, ejecting seeds up to 30 feet away.  Witch-hazel has a long history of medicinal uses dating back to Native Americans who boiled the stems of the shrub and used the extracted oils as an astringent for swelling and inflammation.  The bark and leaves also have medicinal properties.  Today, witch-hazel is still a popular astringent and the chemical components are used in various products used in skin care and to treat various skin ailments.  It has been used as a skin tightener and is a common component in over-the-counter hemorrhoid medications.  Witch-hazel likely got its name from the fact that early American colonists used the twigs for divining rods, a recognized tool of those who practiced "witch-craft."  I always enjoy seeing witch-hazel as it marks the end of the flowering season and the beginning of winter.  Get out in the woods and look for it and may you never look at a tube of Preparation H the same way again.

Posted by Clint Calhoun at 4:51 PM