It's always funny to me, no matter how much I love them, how seeing a snake will almost always make me jump; sort of like getting an electrical shock.  Of course I'm always excited after I recover from the startling reality that I could have stepped on one of my favorite animals and likely caused it harm (or caused myself harm in the event it were a copperhead or rattlesnake).  Such an opportunity always causes me to stop and ponder the circumstances that allowed our paths to cross.

All species have a story that can be told, but only humans have the ability to communicate that story, at least in our own eyes.  The way the story is told most certainly is biased, depending on the relationship and interaction with whatever species the story is being told about.  For instance, someone may tell a story about the wonderful edible qualities of stinging nettle and how they love to eat stinging nettle as though they were collard greens or something.  Someone else may describe the utter horrors of falling into a patch of stinging nettle and the resulting burning and itching that would accompany such a mishap.  The same thing applies to snakes.  We can all recount snake experiences and they are almost always quite different, depending on the love/hate relationship the storyteller has with whatever snake they encountered.  Almost all of them, particularly if you are a southerner or if alcohol was involved, usually begin with, "Well there I was..." and then involve some type of detail of ones exploits in battling the beast for untold number of minutes that ultimately ends in the death of the serpent, not unlike a typical fantasy tale of the heroic knight versus the mighty fire-breathing dragon.  This story is not like that, but rather  what I hope will be a thought-provoking insight into the world of a snake, at least as I perceived it at the time of the encounter.

So, there I was, walking a long the trail at Buffalo Creek Park.  I just finished up doing some GPS work for the next phase of trail construction.  I was hot, thirsty, and on the edge of being exhausted from fighting with rhododendron and doghobble thickets that so frequently lined the streams that I was trying to map.  I was through for the day and on my way back to the truck when I happened to notice something laying on the side of the trail where I was soon to pass.
After my initial heart attack (a typical reaction) at seeing a snake, I immediately recognized it as a garter snake.  Quite possibly the biggest I have seen at Buffalo Creek Park, which I must say has a lot of really big garter snakes.  As a side note, the garter snakes that most people see are usually only about a foot or so long and those are usually kept as pets.  The biggest one I have ever seen was about 36 inches long and that one was laying under a sheet of tin on top of Chimney Rock Mountain (my good friend Steve O'Neil will remember that).  Anyway, this particular snake, I would have to say probably measured about 28 inches long, a good size garter snake to say the least.

A garter snake that large has lived for a pretty long time.  Typical life span is around 15 years, so that's pretty good for a typically small snake species.  Size is a product of age and nutrition.  With an adequate food supply and low number of predators there is lots of opportunity for growth.  Once a snake like this gets old, they tend to stop growing lengthwise and just get "fat and sassy," not unlike humans.

This garter snake, as you can see from the picture, picked himself out a nice little sunny spot to warm up which is what cold-blooded animals must do in order to carry out their biological functions.  In order to maximize warming surface, this snake had relaxed himself enough to get good and flat, thereby exposing as much skin to the sun as possible. 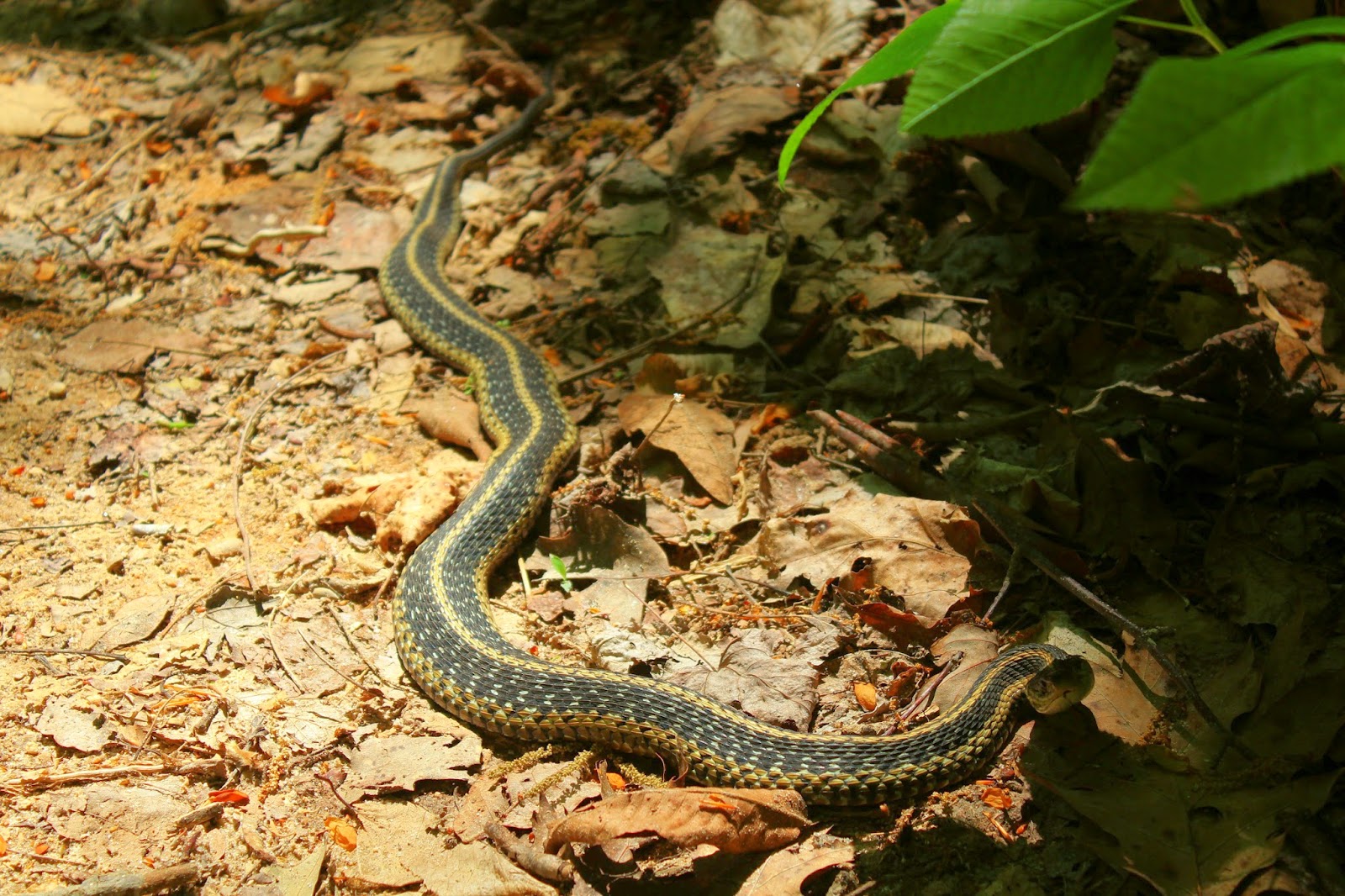 My first observation, aside from the fact that this snake was in the process of warming up, was that he had eaten very recently, evidenced by the slight bulge in the posterior end of the anterior third of the snake (back end of the front third, got it?).  This got me to wondering what he might have eaten.  Garter snakes eat a variety of things, including frogs, toads, salamanders, earthworms, slugs, lizards, and even small rodents.  Basically anything they can catch .  Garter snakes typically catch whatever they are going to eat as it is on the move, thus they usually grab it from behind.  They use their speed to catch up to their prey.  With strong teeth, they will grip their prey and gradually work it down.  Garter snakes are not constrictors so their prey is usually something that will not put up much of a fight and will be fairly easy to get down. 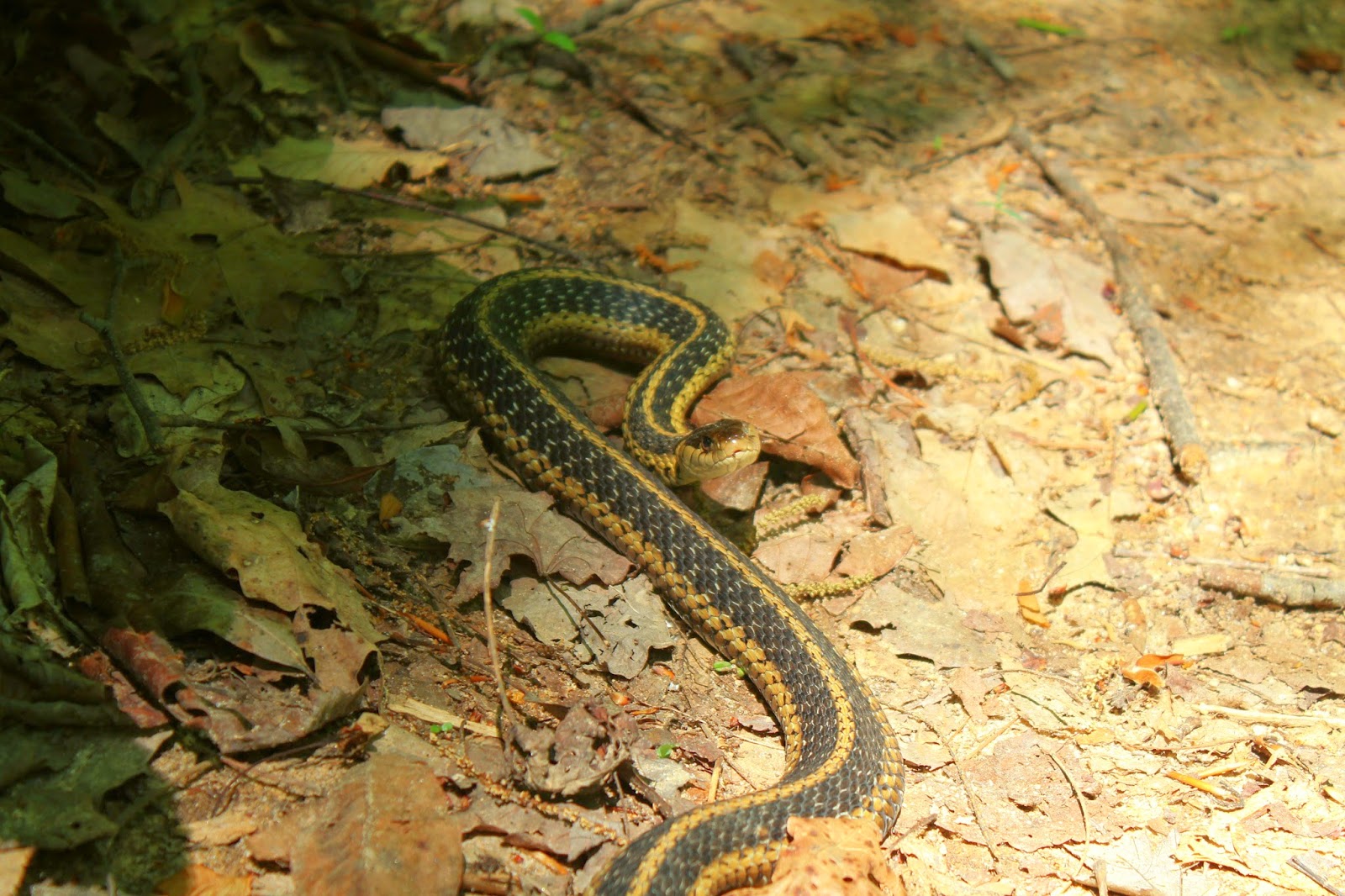 This snake was quite interested in me, as I walked by and got my camera into position for taking its picture.  Each movement I made stimulated tongue flicks and caused the snake to move its head in my direction.  I never experienced that type of behavior with garter snakes before.  Most lay quite still until you try to grab them and then they take off as quickly as they can.  Obviously this snake wasn't interested in me as a prey item, but it was certainly interested in whether or not I would do it harm.  A garter snake that has attained that much size can put up a considerable fight and I took this as a warning that it would not be wise to tick this snake off, because he had no intentions of leaving his nice little sunny spot.

Garter snakes are not what I call aggressive snakes.  Small ones are easy to catch and aside from emitting copious amounts of musk from their cloacal glands when picked up, they rarely if ever bite.  Large adults, while not necessarily aggressive, rarely give up ground initially, will bluff strike repeatedly if you get too close, and will bite the you-know-what out of you if you try to pick them up.  As a general rule, I don't pick up garter snakes without gloves.  I don't like my hands stinking all day and I don't like getting bit.  Garter snakes, when they bite, like to chew tiny holes into your fingers, hands, and wrists.  Their saliva is mildly neurotoxic (but non-lethal), aiding in digestion of their prey.  The result in a bite to humans is one that swells and bleeds profusely.  Initially, the pain is pretty intense, especially if they get you with their back fangs which are extra large and extra sharp.  That pain quickly dulls as the saliva acts almost like a numbing agent.  Some people do experience tingling and numbness at the bite site for hours after the incident.  I have not experienced this myself, but I try to avoid getting bitten at all costs, as this is stressful for all involved.  You have to understand, a snake, no matter what species it is, has no interest in me as a food item.  The only reason a snake has to bite me is to defend itself.  It is up to me to be sensible enough to avoid being bitten by not annoying the snake. 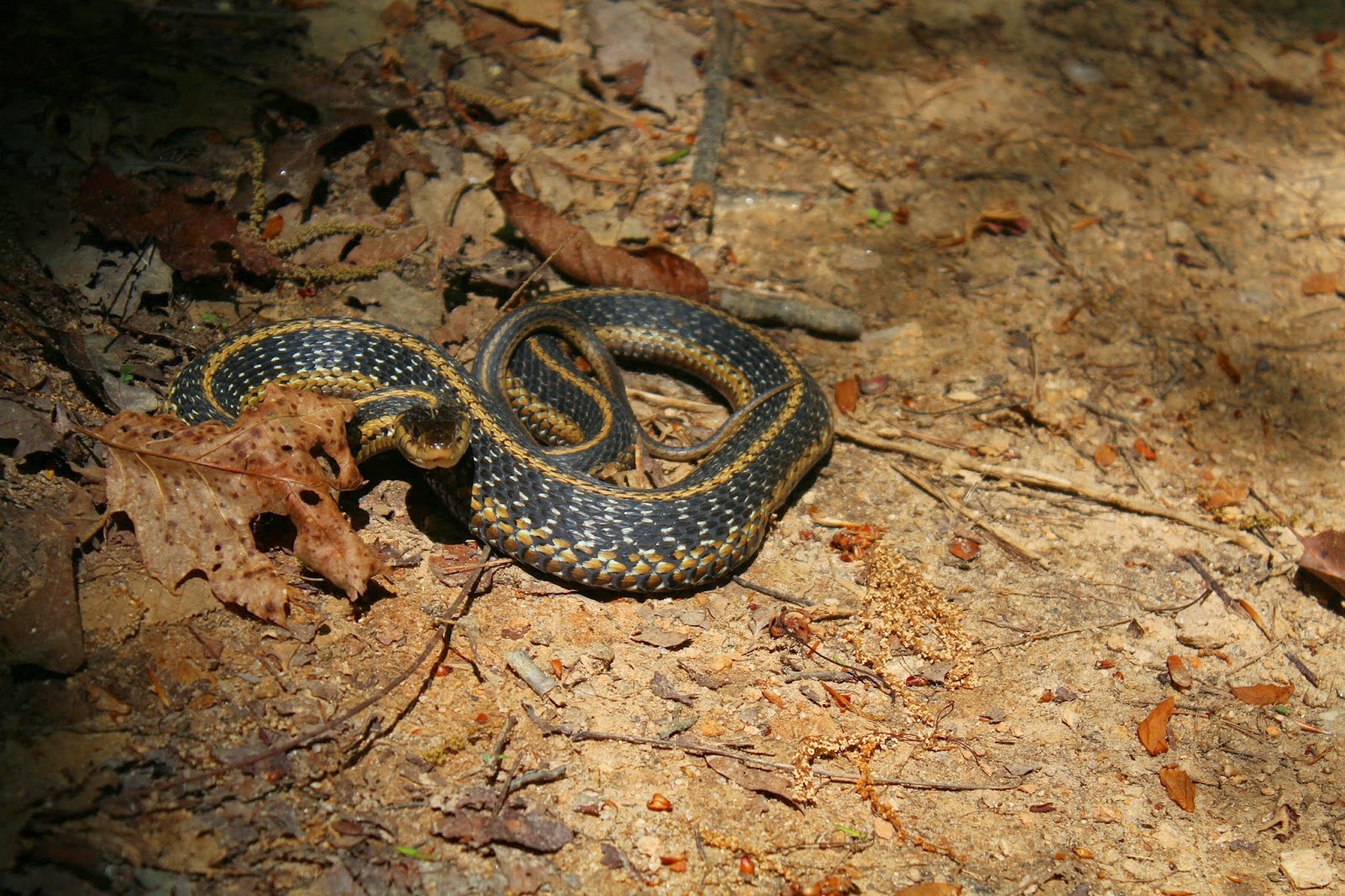 Me being me, I couldn't let sleeping dogs lie, or sunning snakes either.  I poked its tail with a stick.  The result was as expected.  The garter snake immediately went into a defensive coil, struck at me, and repeatedly flicked its tongue, trying to further ascertain what this thing was that was disturbing its sunbathing session.  All I wanted was a better picture and I actually expected that there would be plenty of attitude in the process.  The snake did oblige by getting into a better position.  It was then that I noticed something odd about this particular snake.  Something was not right about one of its eyes.
Somehow or other, the left eye of this snake was injured.  My first inclination was that the eye scale didn't come off during it's last molt (shedding of skin).  That happens sometimes during shedding, that the scale covering the eye will get stuck and not come off with the rest of the old skin.  That didn't appear to be the case here.

So what would cause a garter snake to injure an eye?   The only thing I can say is that it happens.  Sometimes prey puts up a fight.  A garter snake this size is capable of catching small rodents.  Remember that it doesn't constrict it's prey but rather grabs them using speed.  This makes the risk of injury much greater, particularly if you are wrestling with something that has legs and teeth.

I was totally in awe of this big garter snake.  I can only imagine what survival must be like for such a snake.  Garter snakes are the most numerous snakes in North America and have the greatest range of any snake species except for the Eurasian Viper, extending as far north as Alaska.  It shows how adaptable they are.  Garter snakes have been seen in all twelve months of the year in North Carolina so they can easily tolerate cold temperatures.  They are the most commonly seen snakes in suburban areas.  They don't require highly specialized habitat and their diet is not as limited as other larger snake species.  I've spent a lot of time watching garter snakes feed on earthworms, salamanders, and toads.  They are truly amazing creatures.

Finally, the snake had enough and beat a hasty retreat into a hole under some leaves.  While my encounter with this snake was not particularly long, the time spent was enough to ponder where all this snake has been and what has he been through.  I've always felt that in order to appreciate nature, you have to connect with it.  It is important to not necessarily understand nature, but to understand that we have no control of it, that all things play an integral part, and that our role is to take care of our natural resources. Those things living out there in the woods live to survive.  They don't exploit resources.  They don't know greed.  They don't know or associate with emotion, although they have an instinctive understanding of fear.  In the human world of excess and materialism, we could all learn some important lessons from the wild things living in our wild places.

Posted by Clint Calhoun at 12:25 PM No comments: