A Narrow Fellow in the Grass

I am ashamed to say that it has been a while since I've posted anything on this blog.  Since my last post, I have had a career change, moving from the local government/code enforcement world into the educational realm, a move that I am finding to be very fulfilling and purposeful.  I am hoping this career change will open up many more opportunities for adventure and give me subject matter that I can share with a faithful audience, as my readers have proven to be.  Now that apologies are out of the way, the following is an article that I wrote for the June/July issue of The Mountain Breeze that I hope you will enjoy.  I am also including some additional photos that you won't see in the Breeze article.

It’s likely that many of you would remember the poem by Emily Dickinson, A Narrow Fellow in the Grass.; a poem about the poet’s encounter with a snake.  The poem itself has come to represent various symbolic aspects that are often elements of Dickinson’s poetry.  If I’m honest, I can say that I never cared much for symbolic poetry or Emily Dickinson for that matter.  There are some poets that I just don’t get and I tend to like more literal things (maybe that’s why I like field biology).  I will say though that I always appreciated this particular poem if for no other reason that it’s about a snake.

Over spring break, I took the family for a visit to Catawba Falls over in Old Fort.  I was there specifically to see what was blooming and to get some nice waterfall shots without having to fight crowds and wait for people to move out of the way to get decent shots.  We love hiking as a family as it gives us a great way to spend time together and slow our fast-paced lives down to a crawl (you might appreciate this play on words in a second).

On this particular beautiful spring morning, we were hiking up to the falls.  I was focusing my attention on the plethora of wildflowers blooming along the trail edge when my eagle-eyed wife spied a snake.  A beautiful black rat snake was sunning along the trail edge.  It was bright and shiny, its scales almost iridescent, most likely having just shed its skin only a few hours before.  It realized that it had suddenly become the center of attention, an unintended consequence of basking on the side of a trail, and decided that perhaps it would be safer a little farther down the hill.  It climbed up on a fallen log and crawled about halfway down its length where there was a small hole that this snake somehow hoped to be able to crawl into. 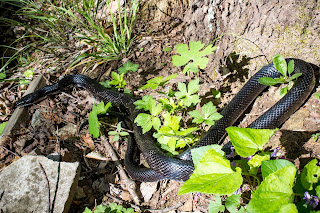 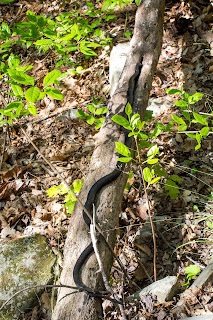 All stretched out now, this snake was quite large.  If I were to estimate, I’d say it was close to five feet long, perhaps a little longer.  Me being me, I abandoned my pursuit of wildflower photos and went into snake mode.  I have a long-held affinity for black rat snakes and will interact with them any chance I get.  I stepped off the trail edge towards the river in the direction the snake was travelling and “headed it off at the pass.”  I gently squatted down beside the log the snake was making its way down.  Undeterred by my presence it kept coming in my direction, allowing me to take pictures, coming to a rest right in front of me.  Its tongue flicked in and out as it sniffed the air, trying to figure out what this large, strange-looking thing was.  Not feeling threatened, it lay there for a few minutes as if waiting for me to get finished so it could go on about its business. 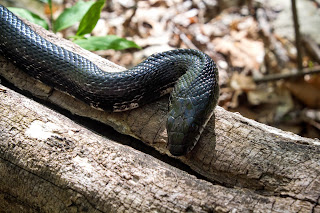 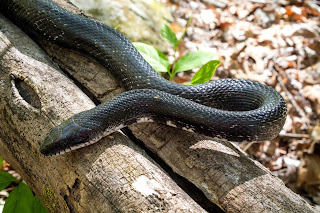 By this time my youngest son, whose curiosity meter is always in the red, was needing to scratch his own itch.  He said, “Daddy, can I touch it?”  He is my son after all!  What could I say but, “Of course you can touch it!  Come here.”  So, Colby climbed down the bank to where I was squatted by the snake.  I carefully instructed him as to how and where to touch him and he did exactly what I told him.  The snake of course reacted to being touched, but not in the way that many readers might expect.  The snake arched its spine in response to the gentle touch of my son; it then slightly opened its mouth, but never turned its head in the direction of the stimulus. I had not seen this type of body language from a black rat snake before but the message I got from it was this, “Hey man! I know you’re curious and all, but I really am not in the mood for you to mess with me right now, so if you would kindly remove your hand from touching me, I will reciprocate by not biting you.”  No problem! 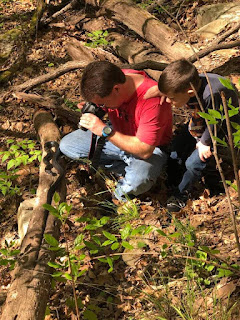 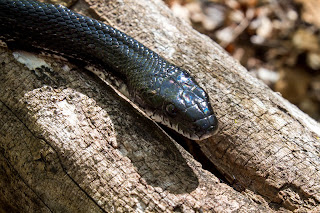 Of course, this interaction provided a perfect teaching opportunity for my kids about how to appreciate nature without having to be exploitive.  We talked about why the snake reacted the way that it did and proper ways to handle snakes.  We talked about why its critically important to leave snakes alone and that if we do have a reason to pick one up, that we must always know what kind of snake it is, but that it’s best to let snakes do what they do and leave the handling to the experts.

Because Colby loves nature, he asked me why people want to kill snakes.  I told him that it’s because people are afraid of things they don’t understand.  I am always amazed how, despite the access to information and knowledge that we have in the age of the internet, that there is still such a deep-seated hatred for our legless friends.  The news media does very little to help ease the tensions as they sensationalize stories about snake bites and never do anything when it comes to talking about the benefits of snakes and their ecological roles.    It’s really quite sad, especially given the fact that many snake species are declining, especially as the human population continues to increase.

This is not my first snake story, nor will it be my last, but I hope this writing provides some food for thought.  Snakes are important too!  They have been a part of human culture throughout history.  They have served as a symbol of early America.  Benjamin Franklin had high regard for the timber rattlesnake.  Here is a quote attributed to Benjamin Franklin from “An American Guesser” published in the Pennsylvania Journal on December 27, 1775.

“I recollected that her eye excelled in brightness, that of any other animal, and that she has no eye-lids. She may therefore be esteemed an emblem of vigilance. She never begins an attack, nor, when once engaged, ever surrenders: She is therefore an emblem of magnanimity and true courage. As if anxious to prevent all pretensions of quarreling with her, the weapons with which nature has furnished her, she conceals in the roof of her mouth, so that, to those who are unacquainted with her, she appears to be a most defenseless animal; and even when those    weapons are shown and extended for her defense, they appear weak and contemptible; but their wounds however small, are decisive and fatal. Conscious of this, she never wounds 'till she has generously given notice, even to her enemy, and cautioned him against the danger of treading on her.”

Couldn't have said it better myself!

Until Next Time!
Posted by Clint Calhoun at 10:05 PM 2 comments: