Spring is an exciting time for us here in the south.  The leaves start popping out, the grass starts getting green, and the bitter cold of winter quickly becomes an almost forgotten memory.  I am always eager for spring because it gives me the chance to get rid of the winter “blahs” and get outside into what I call my natural environment.  Nothing gets me more excited than spring wildflowers and some of my favorites are what we call the spring ephemerals.  Spring ephemerals are a group of plants that conduct most of their biological activity underground, but for a short period of time will produce photosynthetic material in the form of leaves (or similar structure) and a flower.  The plant will then capitalize on this brief time of photosynthesis to not only flower but be quickly pollinated and produce seed before going dormant for the rest of the year.  Dormancy is probably not an ideal choice of words because biological activity (i.e growth) is taking place, we just don’t see it happening because all activity is underground.  There is one specific genera of spring ephemerals that I would like to focus on and that is Trillium.

Trillium(s) are members of the Lily Family and are probably the most well-known and sought after of our spring ephemerals.  Trilliums are named for the three leaves (they are actually not true leaves but that’s a lesson for another day) and three petaled flower.  Members of the Lily Family typically have floral parts arranged in threes or multiples of threes.  The entire above ground portion of a trillium is technically the inflorescence.  Due to space and time we will skip the plant physiology lesson and just move right into the fact that the parts that make up the inflorescence of a trillium are in threes or multiples of threes except for the stem (peduncle). Typically trilliums have a solitary inflorescence.  The flower consists of three leaves (technically bracts), three sepals, three petals, a single pistil with three stigmas, and six stamens.  Trillium flowers are divided into two groups:  sessile and pedicellate.  Sessile meaning that the floral parts are held directly above the bracts; pedicellate meaning that the floral parts are held on a long stalk that extends above the bracts, either standing erect or drooping underneath the bracts.  There are numerous pollinators of trilliums including bees, flies, and beetles in some cases.  The seeds are harvested and distributed throughout the forest by ants.

Another trillium of Hickory Nut Gorge is one that is mostly found in rich woods (most trilliums are) and around seeps and wet areas.  It is called southern nodding trillium (Trillium rugelii).  While little-sweet-betsy is short, typically less than a foot tall, southern nodding trillium is usually slightly over one foot tall.  This trillium is pedicellate with the flower "nodding" beneath the large green bracts.  The petals are white and recurve backwards.  The pistil and stamens are maroon as is the throat of the flower before it reaches maturity.  Southern nodding trillium typically blooms in April, into May.  Best places to look for it are the Four Seasons Trail or the Park drive below the Ticket Office in the attraction part of Chimney Rock State Park and Bat Cave Preserve (take a guided hike to see).
Great white trillium (Trillium grandiflorum) is probably the most showy trillium species of Hickory Nut Gorge.  Another pedicellate trillium, great white trillium has the largest flower of all the trilliums and easily stands out on the forest floor where it is found.  The petals are most commonly white, but often turn pink as the flowers age. Great white trillium is found in rich woods, typically at the higher elevations of Hickory Nut Gorge.  Best place to see it is in the woods in and around Gerton such as Hickory Nut Forest and at the very top of the Gorge at Hickory Nut Gap.
Catesby’s trillium (Trillium catesbaei) is a delicate pedicellate trillium.  This is our smallest trillium.  Like the southern nodding trillium, the flower of Catesby’s trillium droops beneath the bracts.  The petals are typically white, pink, or rose colored with bright yellow pistil and stamens.  The bracts are small and often have wavy margins at the time of flowering.  This trillium is typically found in acidic forests but can also be found in cove forests as well.  Look for it in dry woods in Hickory Nut Gorge such as at Buffalo Creek Park (The Town of Lake Lure’s newest recreational area) or along the roadside of NC 9  North towards Black Mountain.

A few years ago, a friend of mine (and fellow biologist), James Padgett and I discovered a solitary Vasey’s trillium (Trillium vaseyi) on what is now State Park property on the north slope of Rumbling Bald.  Vasey’s trillium is a large nodding trillium that at first glance looks very much like southern nodding trillium except for its deep maroon flowers.  It can be found in similar habitat as southern nodding trillium and may actually hybridize when the two are in close proximity to each other.  Unlike other maroon, pedicellate trilliums which often have unpleasant odors, Vasey’s trillium smells faintly sweet.  The only place I have seen this trillium is the north side of Rumbling Bald so that is the only place I can tell you to look for it, but most everything there is private property so don’t trespass while looking for it.

The last known trillium found in Hickory Nut Gorge is a significantly rare species called sweet white trillium (Trillium simile).  This is the only trillium in the Gorge that I have no photographic record of, nor have I ever seen it with my own eyes.  I know it exists from other botanists who have documented its occurrence.  Sweet white trillium is an erect, pedicellate trillium with large bracts and white petals, similar to great white trillium only smaller.  Instead of yellow pistils and stamens, the pistil is dark purple to black and the stamens are whitish.  It is also found in cove forests under mature trees or in rhododendron thickets.  It has a sweet fragrance.  The only known record of occurrence in Hickory Nut Gorge is Cane Creek Mountain on State Park property.  Hopefully one day I can add this one to my list.

If you would like to know more about trilliums, I would recommend picking up a copy of Trilliums, by Frederick W. Case, Jr. and Roberta Case.  It is one of the most comprehensive books on trilliums I have ever seen, and it adequately describes the trillium species common to our area.  Click on the link for additional pictures of the trilliums of Hickory Nut Gorge.

Smooth Alder: the First Flower of the Year 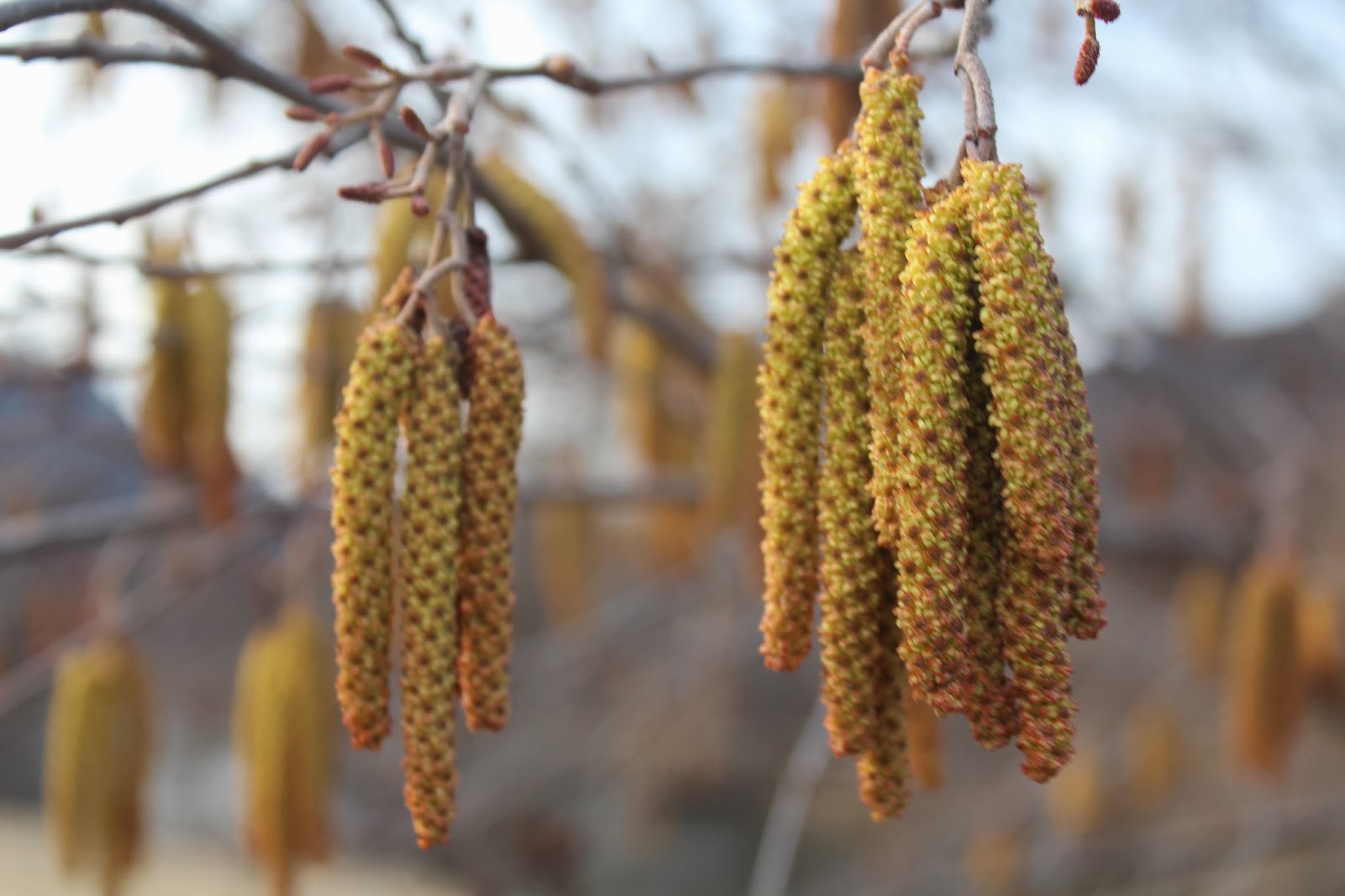 Now that we have made it through a pretty substantial snowstorm and the temperatures are warming up, lulling us into a false sense of security that winter might finally be over, we find ourselves wanting to get outside.  Of course the woods are still drab and lifeless except for the woodland birds and other wildlife such as the occasional squirrel or deer that might be passing through or foraging through the compacted leaf litter.  But, we wait with great anticipation for the first flowers of spring to arrive.  Soon we will see crocus and daffodil popping out of the ground (all non-native species, just so you know) and then the trilliums and other spring ephemerals will come forth, but while we wait, we can take comfort that spring is around the corner and there is one plant in particular that tells us that spring is on the way.

Smooth alder (Alnus serrulata), also known as tag alder, is a dense shrub found in and around wet areas such as bogs, drainage ditches, streambanks, and the shoreline of ponds and lakes.  It often grows in dense thickets but can also be found as two or three stems in scattered localities.

Smooth alder is a member of the birch family and is one of the earliest blooming species found in our area.  It starts flowering here in mid-February and is easily recognizable by the long yellow catkins that hang from the branch tips.  Catkins are a type of inflorescence that are long and contain hundreds of individual flowers.  In the case of smooth alder, the first catkins to appear are male and contain pollen bearing stamens.  The female catkins are shorter than the male catkins and mature at the time the male flowers are producing pollen.  Wind pollinates the flowers.  Male and female catkins are typically borne on the same plant.
Of course, this time of year the flowers are the only structures found on the plant.  The leaves do not appear until after spring has arrived.  Smooth alder is typically multiple stemmed, with smooth gray bark.  The leaves strongly resemble birch leaves, being slightly toothed, and elliptical to obovately-shaped.  The leaves typically have a waxy appearance.

Smooth alder is found throughout eastern North America, as far north as the St. Lawrence River and as far south as Florida.  It prefers loamy and clay soils  that may or may not be nutrient rich and has the ability to fix nitrogen in the soil.

There are records of smooth alder being used for medicinal purposes.  Historically it is one of those plants that was recognized in folk remedies as a purification plant which could perform multiple tasks and cure the "winter blahs."  It has been used in the treatment of diarrhea and other internal ailments.  Externally it has been used from everything from hives to hemorrhoids.

The wood is thin and brittle and has no commercial value, but it is valued as an erosion control plant because of its extensive root system.  It is well suited for stabilizing shorelines along rivers and lakes and is often planted for that purpose.

You may have been driving down the road or strolling along a creekside or lakeside trail and encountered this shrub before and asked yourself what is that plant with those odd, yellow things hanging off of it.  Now you know the answer.

Posted by Clint Calhoun at 10:06 AM No comments: