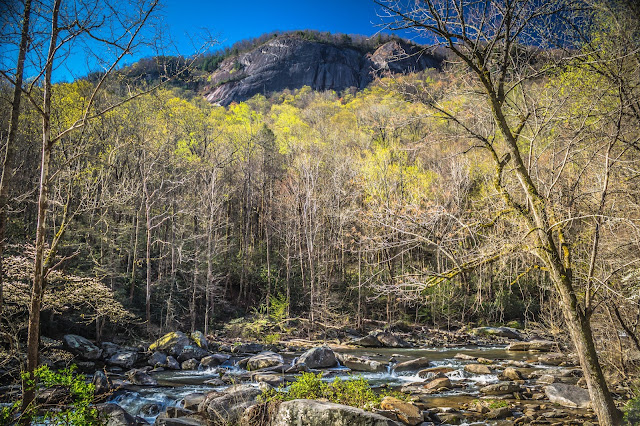 Recently, I had the great pleasure of visiting a location in Hickory Nut Gorge that had been on my to-do list for some time, but the right opportunity had not presented itself to make the trip.  A few weeks ago, Ranger Stephen Tillotson contacted me along with several other folks abut participating in Earth Day festivities at Chimney Rock State Park.  I participated last year with a booth on water quality in the Gorge and Lake Lure and had a blast.  I set up a couple of microscopes with some slides of aquatic organisms; someone caught a hellgramite and we put that on display.  It was a great day.  Unfortunately, this year I am leading a wildflower hike for the Nature Conservancy on Earth Day, so I'm unable to participate in the CRSP event.  Not one who is easily deterred, Ranger Stephen posed an alternative option of assisting him with a hike to Blue Rock Mountain.  Not one to pass up such a great opportunity, I immediately said yes.

Blue Rock is the next big granite dome west of Chimney Rock Mountain.  The giant rock face looms high above the Rocky Broad River over the Bat Cave Preserve on the south side of Hickory Nut Gorge and is the last big face of the Rutherford County portion of the Gorge if you are travelling west.  I always wanted to visit Blue Rock and was aware that there was a trail to the top, though I had never walked it, even during my many years as a Bat Cave Preserve monitor.  The giant rock face has always intrigued me, particularly after Chimney Rock's peregrine falcons took up residence there for a few years before moving back to The Chimney Rock site.  I always felt that, like so many other places in Hickory Nut Gorge, there was probably some cool things growing on those rock faces.

I got up on Saturday morning, eager to get going.  My son, Cayden, told me that he wanted to go, so of course I said yes.  Cayden really likes hiking and he especially likes spending time with me when he gets me to himself (no little brother around).  I enjoy it as well and it gives me chance to impart some of my outdoor knowledge to him and just enjoy being a dad.  I got all our stuff together, including some light rain gear, given the unpredictable weather being forecasted.  We grabbed a couple of bottles of water and made our way up to Chimney Rock State Park.

I don't like being late for anything if I can help it and this time was no different.  I got to the Park about an hour early.  My intention was to see what spring ephemerals were blooming in preparation for the hike.  Cayden and I drove up the mountain to a large boulder field that sits beside the road near the Hickory Nut Falls trail.  Because of its eastern exposure, this spot has always been a good place for wildflowers.  I pointed out trilliums and unopened bloodroot to Cayden and told him to remember them because we would likely see them again at some point in our hike.

We drove back down the mountain and met Ranger Stephen and the rest of our group at the Ticket Plaza.  After some brief introductions, we carpooled over to the backside of Blue Rock Mountain which lies in Henderson County and is accessed from Edney Inn Road.  The county line actually bisects the top of Blue Rock so most of our hike was on the Henderson County side of the mountain.  Several years ago, the Nature Conservancy acquired several acres of Blue Rock that adjoined the Bat Cave Preserve, knowing that one day there would be a state park in Hickory Nut Gorge.  The state park recently acquired that same parcel from TNC, adding to the size of the Park and connecting the Chimney Rock portion of the park to the Bat Cave Preserve which will continue to be owned by TNC.  This connection is critical for creating an eventual trail corridor that will hopefully, someday, allow experienced hikers to traverse the entire rim of Hickory Nut Gorge, but I digress.

Our group of seven, and our gear, found the logging road which would be our route for the journey. The old road, like most logging roads in the Gorge was pretty eroded in places, but overall not too bad.  We crossed over a nice little stream that may require some further exploring at some point.  The elevation change leads me to believe that there could be some waterfalls, so that in itself makes it worth checking out.

My role on this trip was to provide commentary on any wildflowers that we might encounter along the way.  Of course, being that we were technically a few days short of spring, the spring ephemerals were not yet at their peak.  The first of the wildflowers we encountered was bloodroot (Sanguinaria canadensis).  Bloodroot is a member of the Poppy Family and gets its name from the root which exudes a reddish sap that looks like blood.  Bloodroot contains an alkaloid called sanguinarine that has been studied as a potential treatment for certain types of cancer.  It's white flowers are always a welcome sign that spring has finally arrived.  Bloodroot has flowers that close up at night and will remain that way until the air warms sufficiently in the morning to cause the flowers to re-open.  Because it was still fairly early in the day and the sunlight had not quite reached the deep ravines on that side of the mountain, the bloodroot flowers had not yet opened for the day.
In addition to bloodroot, we saw little-sweet-Betsy trillium (Trillium cuneatum), the first to flower and most abundant of our trillium species.  Little-sweet -Betsy is generally pretty widespread throughout Hickory Nut Gorge, typically occurring in cove forests.  It's mottled leaves and apple-scented, maroon flowers easily draw the eye, making this wildflower another spring favorite.

As we walked, the road meandered through steep sloped acid cove forest, dominated by Rhododendron maximum and then into gently sloped rich cove forest which slowly graded into montane oak-hickory forest.  As the the forest community changed, so too did the number of species that were in flower.  Along the road on the steeper banks we encountered robin's plantain (Erigeron pulchellus) and some Carolina vetch (Vicia caroliniana) in flower, but in general most things had not quite awakened from their winter slumber.


We came to a fork in the road, so it was decision time.  Ranger Stephen had given me a map so I knew which way to go, but it gave us a chance to catch our breath and discuss the property a little bit and talk about where each trail eventually leads.  The fork to the left will take you back down the west side of the mountain and around to the north side to the Bat Cave Preserve.  It's a long sinuous trail back down into the Gorge.  The right fork (the one we were taking), takes you to the Blue Rock summit and the exposed granite dome for which the mountain is named.

We passed by the site of an old homesite, formerly a cabin until it burned sometime last year.  The history of the cabin is unknown, but apparently was someone's home until fairly recently.  The cause of the fire is not known, but it is suspected that perhaps some hikers were using it for shelter and may have accidentally let a fire get out of control.  It also could have been arson...who knows?  Either way, nobody's talking.

We made our way up the final push along a ridge that was once home to majestic eastern hemlocks that have succumbed to the invasive and destructive hemlock woolly adelgid.  A few table mountain pines and white pines have also claimed the top as their own.  The trail led to a small clearing which appears to have a history as a campsite (the well-used fire ring sort of gave it away).  From there it was just a short walk through the rhododendron to the top of the rock face that overlooks Hickory Nut Gorge, towering above the Bat Cave Preserve property.

Granite domes such as Blue Rock are ecological treasure troves.  Many of the plants found on granite domes are specialists that thrive in thin soils and extreme conditions that vary from very hot and dry, to very wet and cold.  I did a little exploration of the dome which is fairly steep and narrow.  There were various lichens and mosses growing on the surface of the rock, succeeded by several other plants that were not yet flowering such as marginal shield fern (Dryopteris marginalis), twisted hair spikemoss (Selaginella tortipila), several unidentified grasses, smooth sumac (Rhus glabra), and mock orange (Philadelphus sp.).  There were also several clumps of granite-dome goldenrod (Solidago simulans), a rare species found in similar locations in Hickory Nut Gorge.  There were also several clumps of pale corydalis (Corydalis sempervirens) which I had not seen in quite a long time (since my years working at Chimney Rock Park).  Given the short amount of time and the earliness of the year, I did not get to explore Blue Rock as thoroughly as I would have liked, but that's why you make more trips, right?

We took in the view, ate some lunch, and snapped rare photographic views of the Gorge that are by and large unseen by the general public.  The forecasted rain never showed up and the temperature was perfect for the kind of hiking we had done.  Our group re-packed our various things and set out on the return trip, which was a rewarding, sometimes painful, downhill-all-the-way hike.

Cayden graciously offered to carry my pack back down the mountain.  He either felt sorry for me or he was seeking to impress the young lady who was also on the hike.  Either way, I was more than happy to let him carry the heavy pack if he was that eager.  I figured it would help build his leg and back muscles for baseball.

We stopped occasionally on the way back down to discuss flowers that we hadn't talked about on the way up such as spicebush (Lindera benzoin) and some of the orchids that would bloom later on in the spring and summer such as puttyroot (Aplectrum hyemale), cranefly orchid (Tipularia discolor), and downy rattlesnake plantain (Goodyera pubescens).  We looked once again at the bloodroot that we had passed on the way up, the flowers of which had fully opened.

We came to the end of our 3.8 mile round-trip hike where we exchanged handshakes and goodbyes.  Ranger Stephen drove Cayden and me back to my truck that we left at the Ticket Plaza.  Cayden and I ended our exciting adventure with some wildflower pictures near the Park entrance and a hearty meal at the Old Rock Cafe, where we ravenously devoured a philly cheese steak sandwich (me) and some chicken tenders (Cayden).  We headed home feeling tired but happy, knowing that we had shared an adventure that we will both remember for the rest of our lives.

Posted by Clint Calhoun at 5:26 PM