When they started forecasting the possibility of snow a few days ago, as usual I got really excited.  Of course the prediction was that our area would see only a slight dusting to maybe a half an inch at best.  Some forecast models even showed our area getting zilch.  As is often the case, we got more than predicted.  Not much more, but at least it wasn't just a dusting.  Usually with Gulf moisture storms, our snows tend to be wet and fluffy, but this time due to an extremely cold air mass already in place, the snow was very fine, almost powder-like.  If the moisture had been increased and the temperatures slightly warmer, our inch would have likely been 3 or 4, and that's still with the bulk of the moisture to our south and east.

As the snow started coming down around lunchtime on January 28th, I kept thinking, "You know this could be a nice snow."  I had my camera fired up and ready to go.  All I needed was the right opportunities.  I was not disappointed.  By 3:00 in the afternoon, the snow had accumulated enough that I could get some great shots.  To make it better, the marina bay at Lake Lure had re-frozen and a thin layer of snow had descended upon it.  Here's a couple of shots I grabbed. 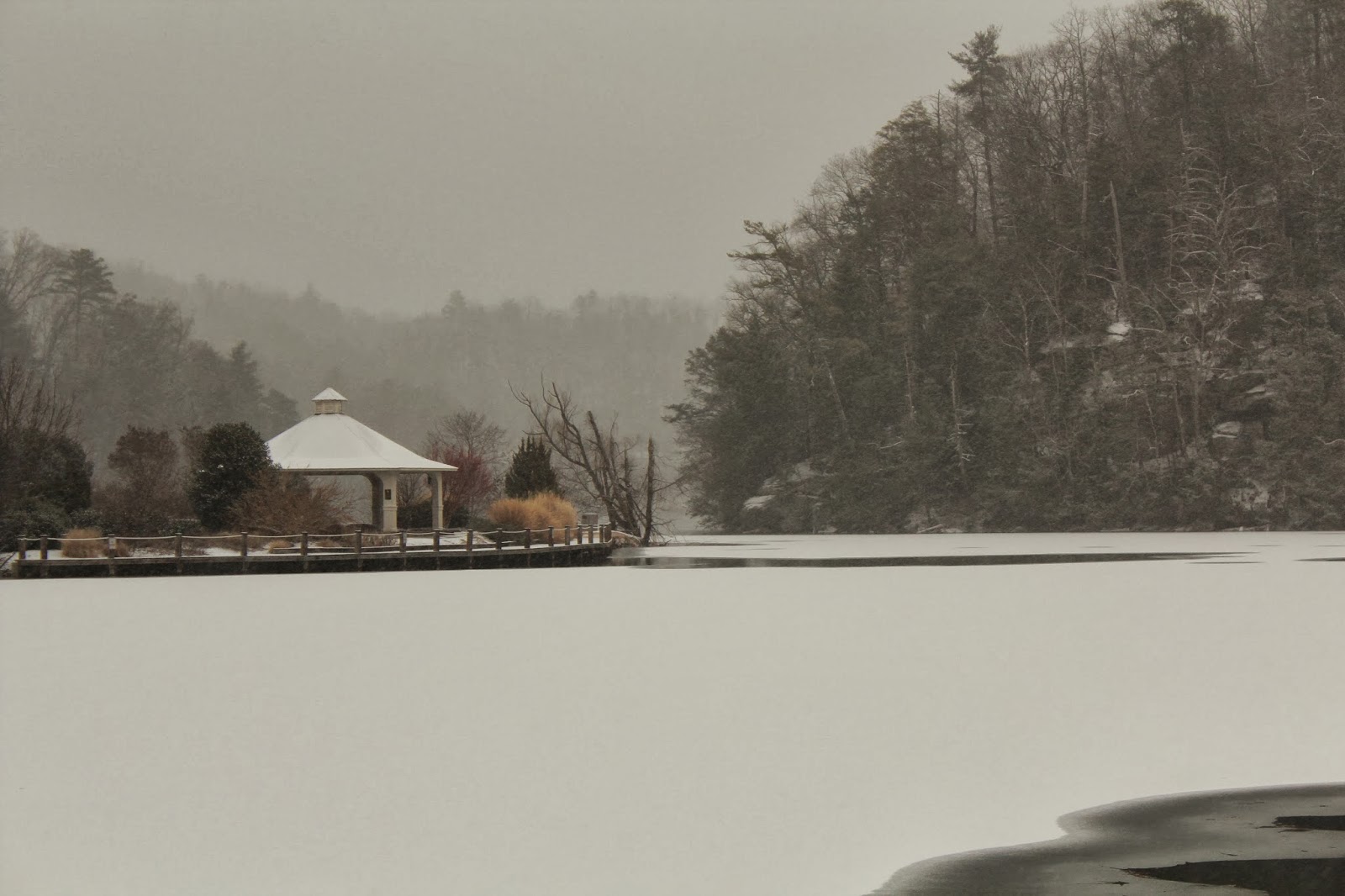 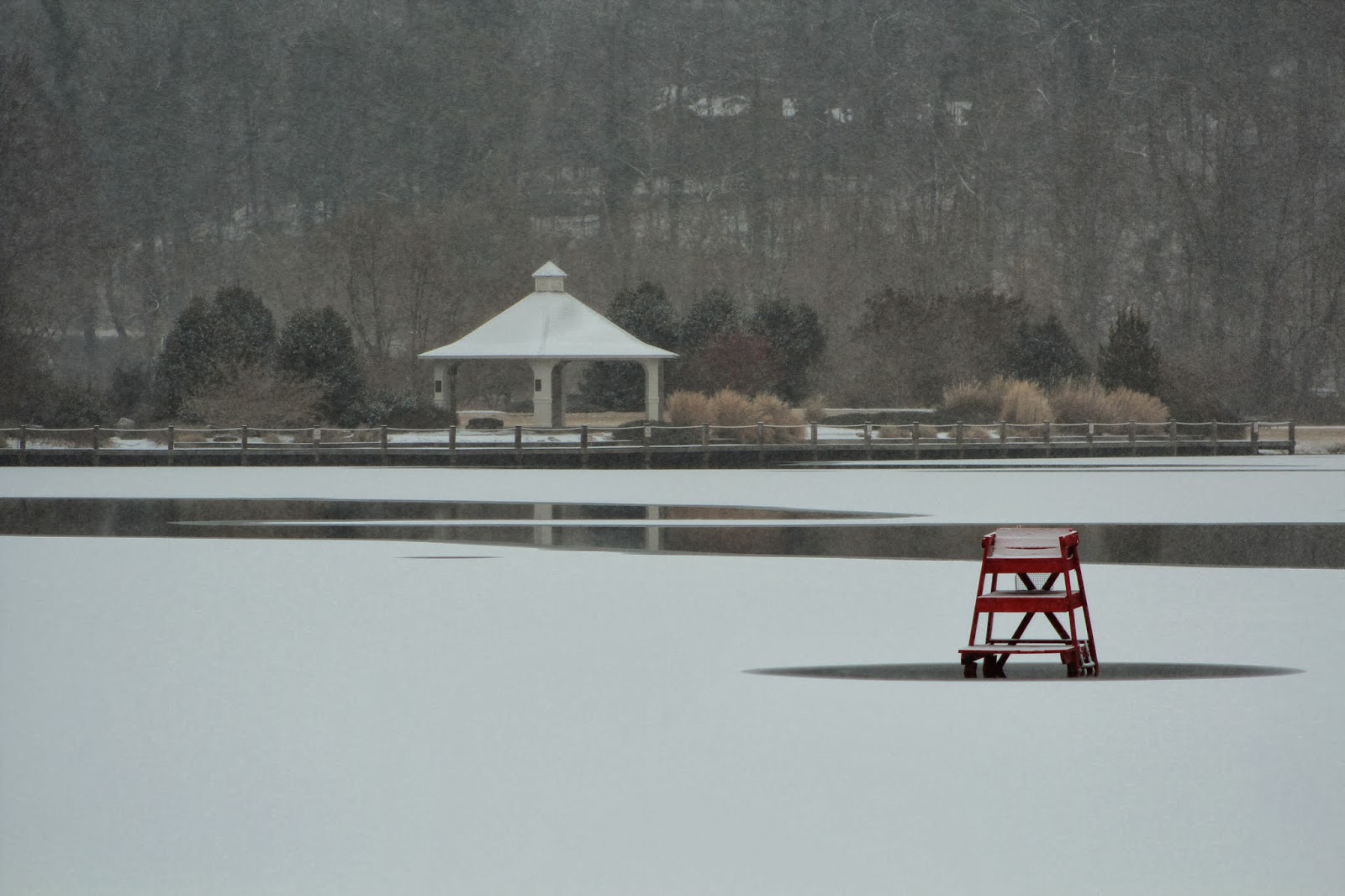 Of course, I knew that such a small amount of snow wouldn't stick around too long so I had to get out early to get more shots.  The morning was clear and cold with just enough clouds in the sky to offer some contrast.  Here's the same shots as above, only with sun and no snow falling. 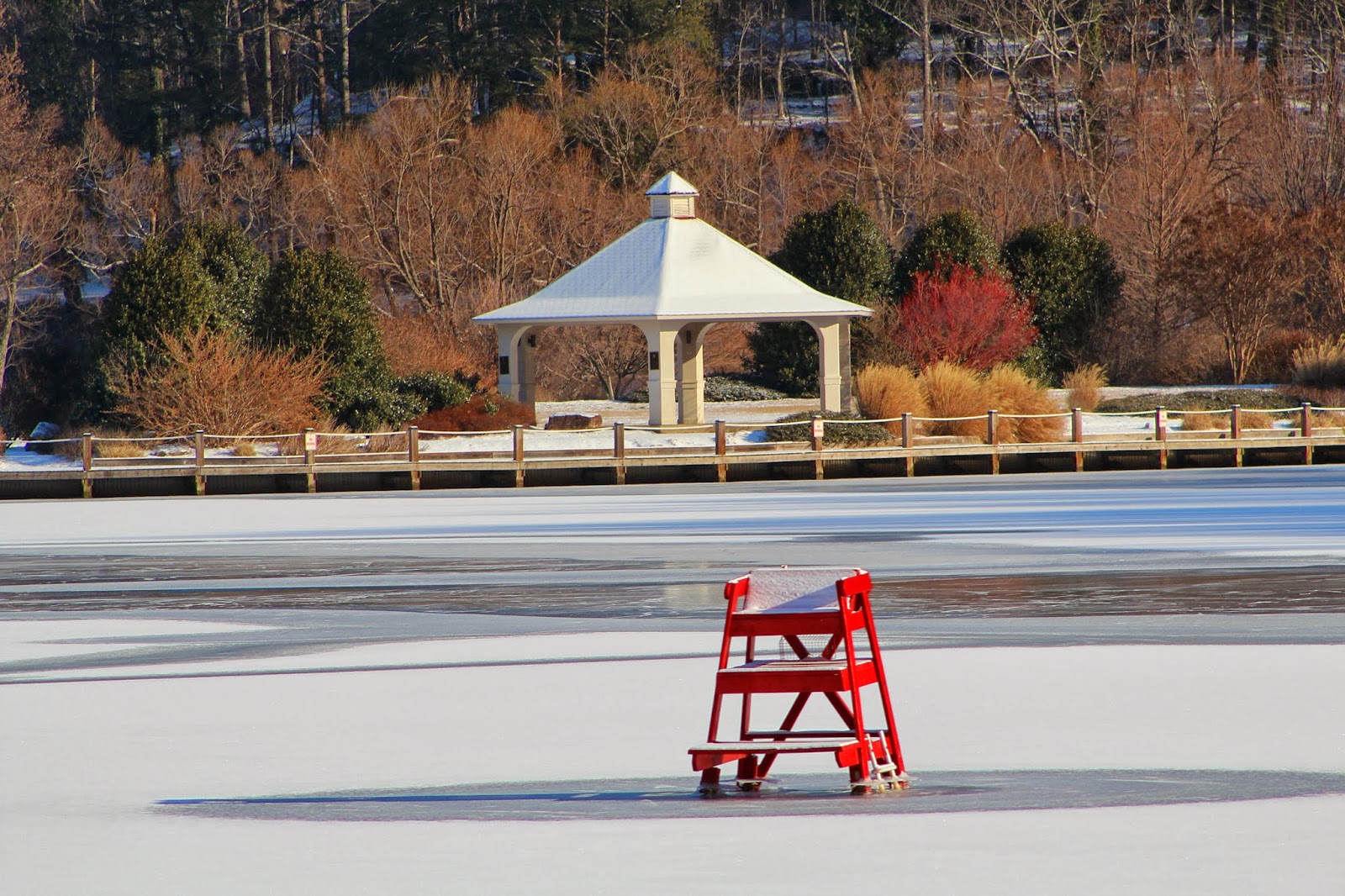 With the sky as clear as it was and plenty of snow on the cliff faces around the lake.  I thought I would also grab a few shots there too.  When the snow was coming down, it was impossible to see the mountains because the ceiling dropped so low. 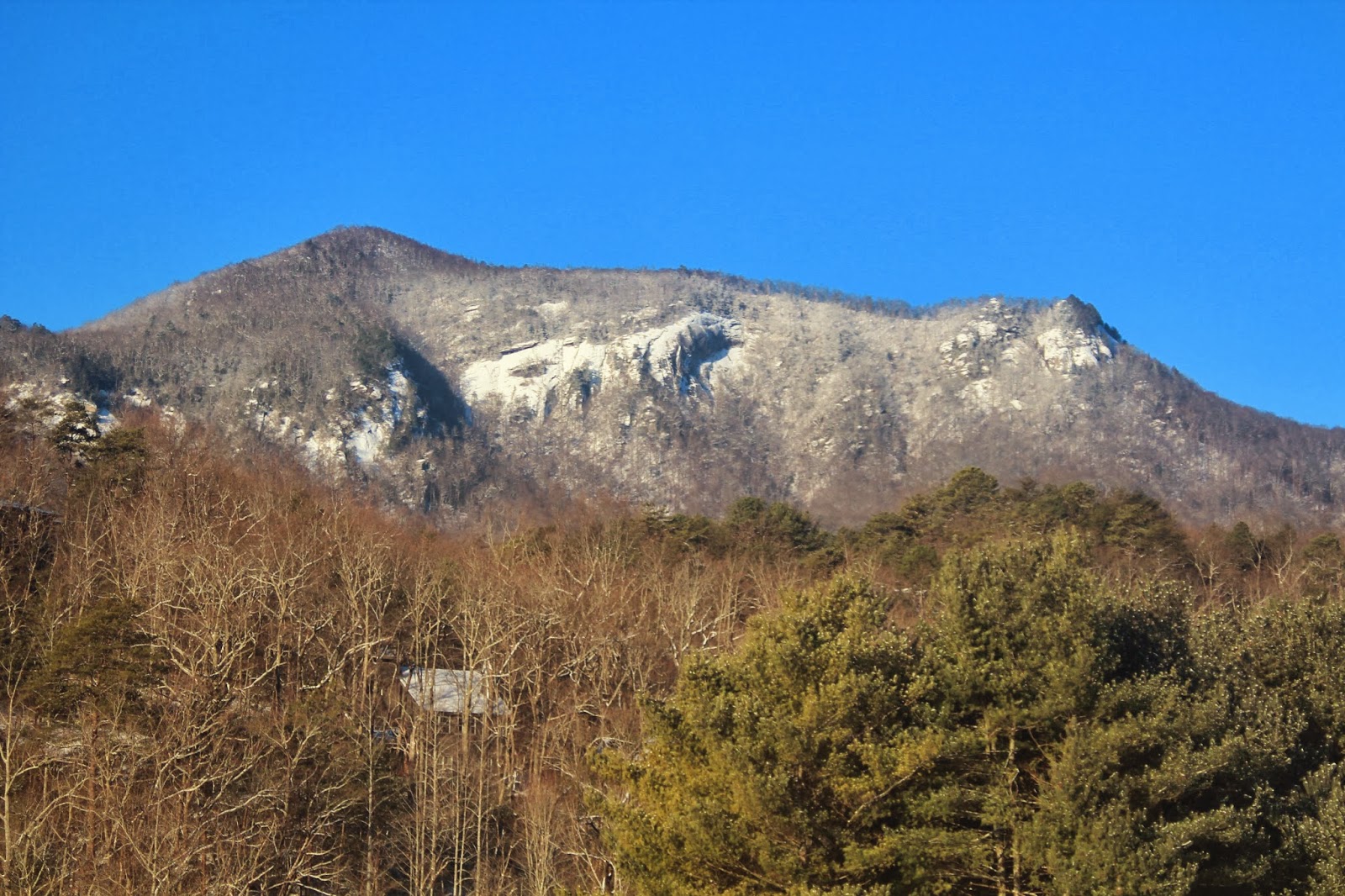 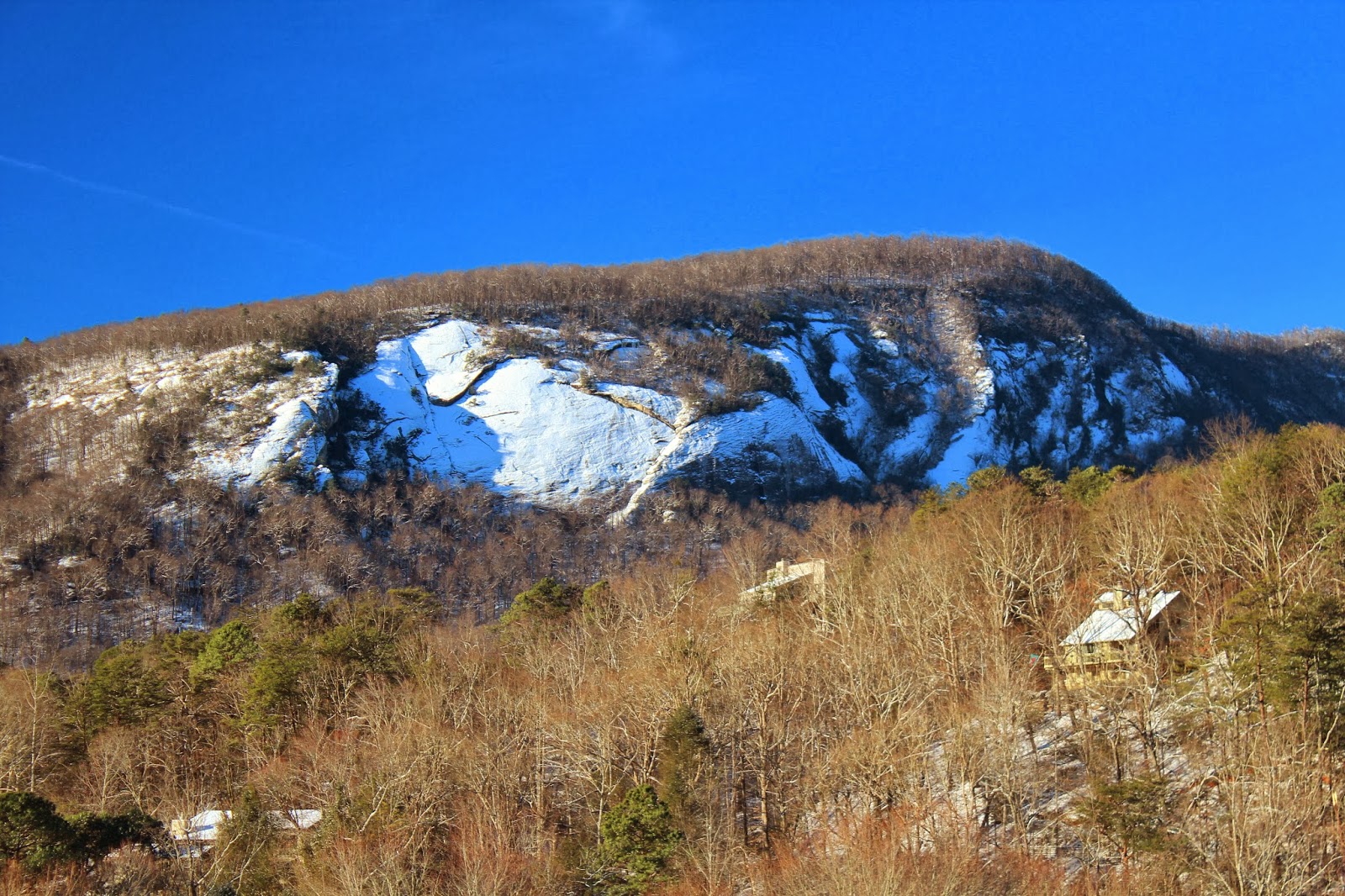 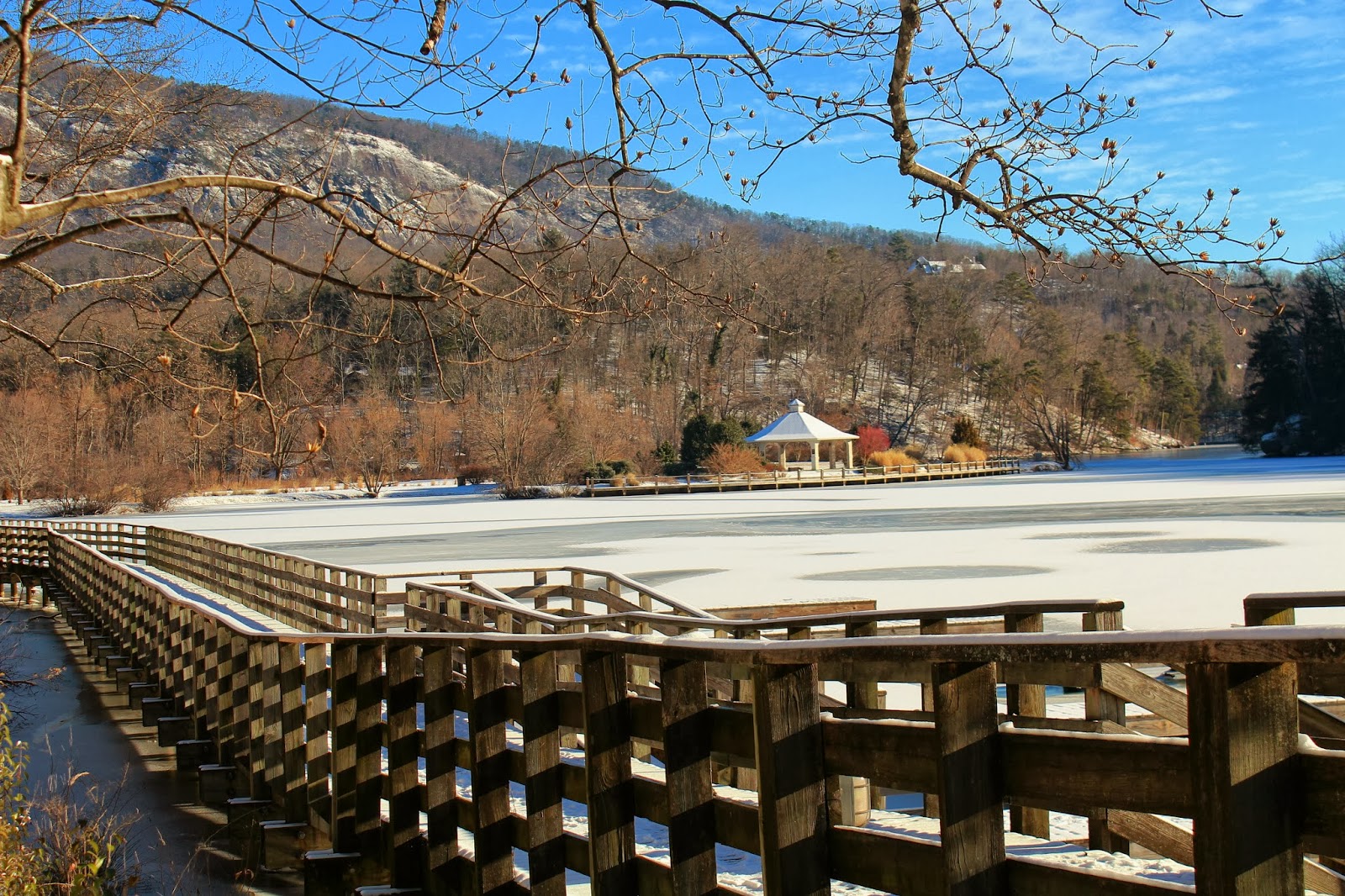 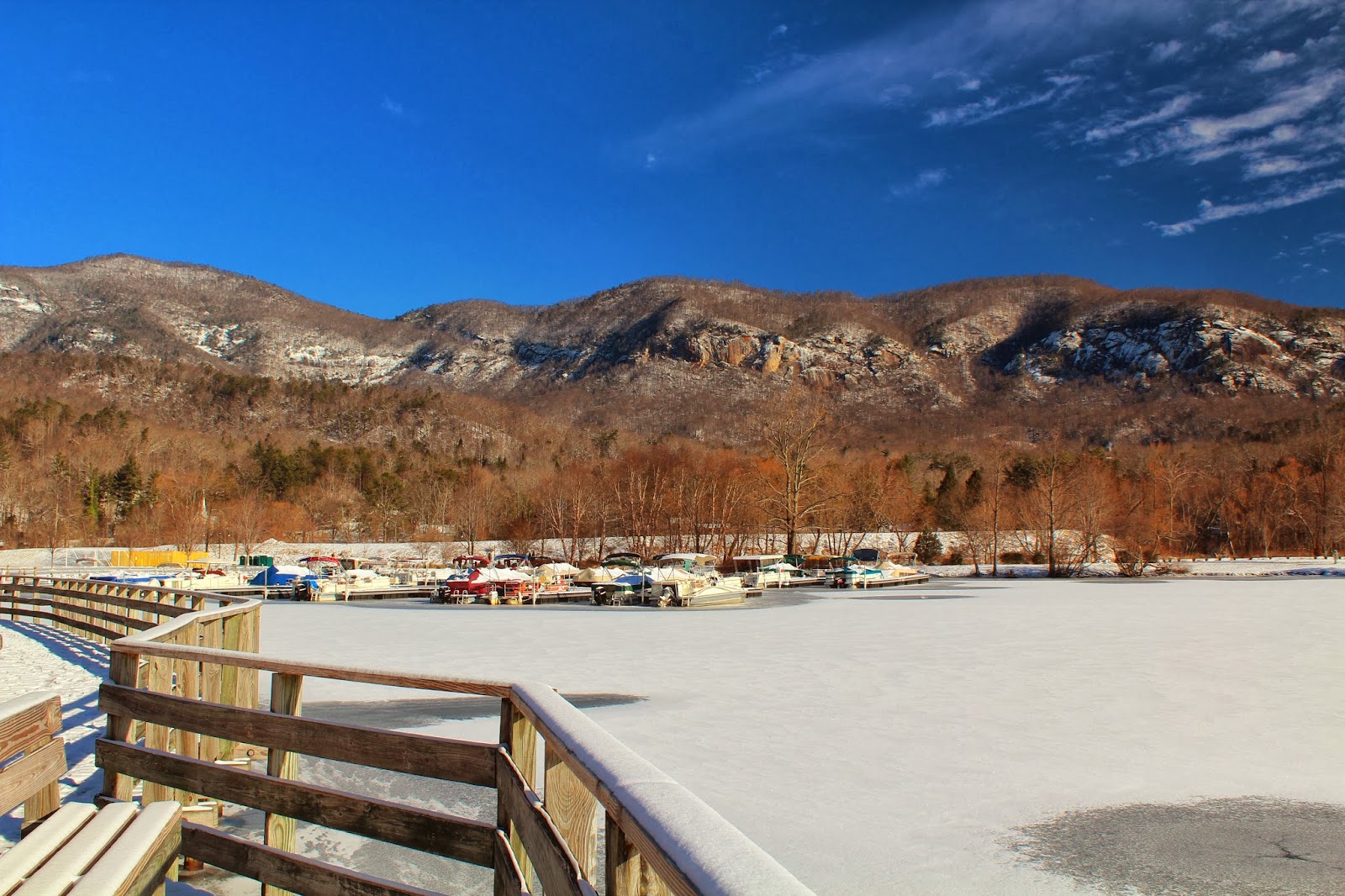 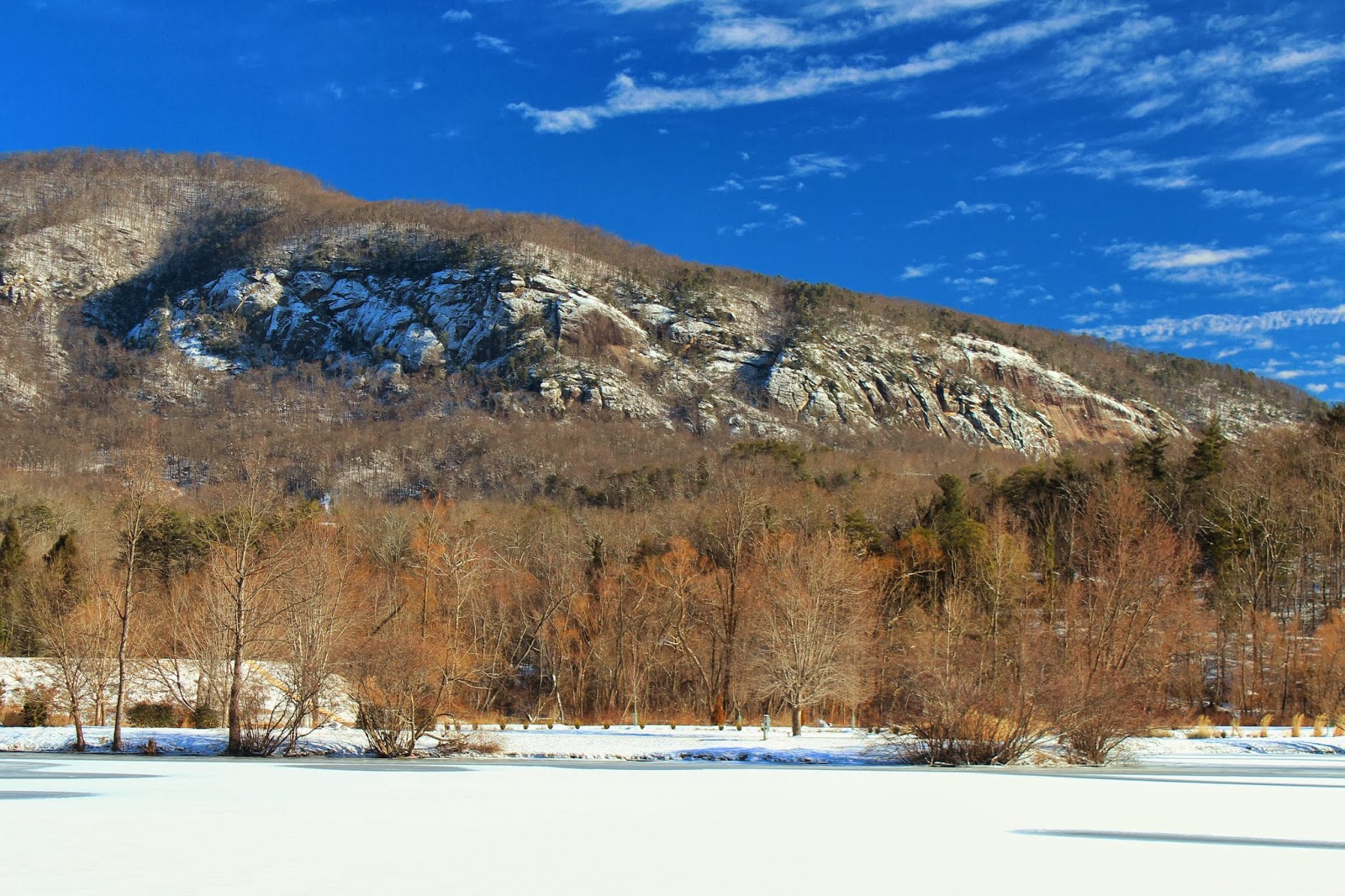 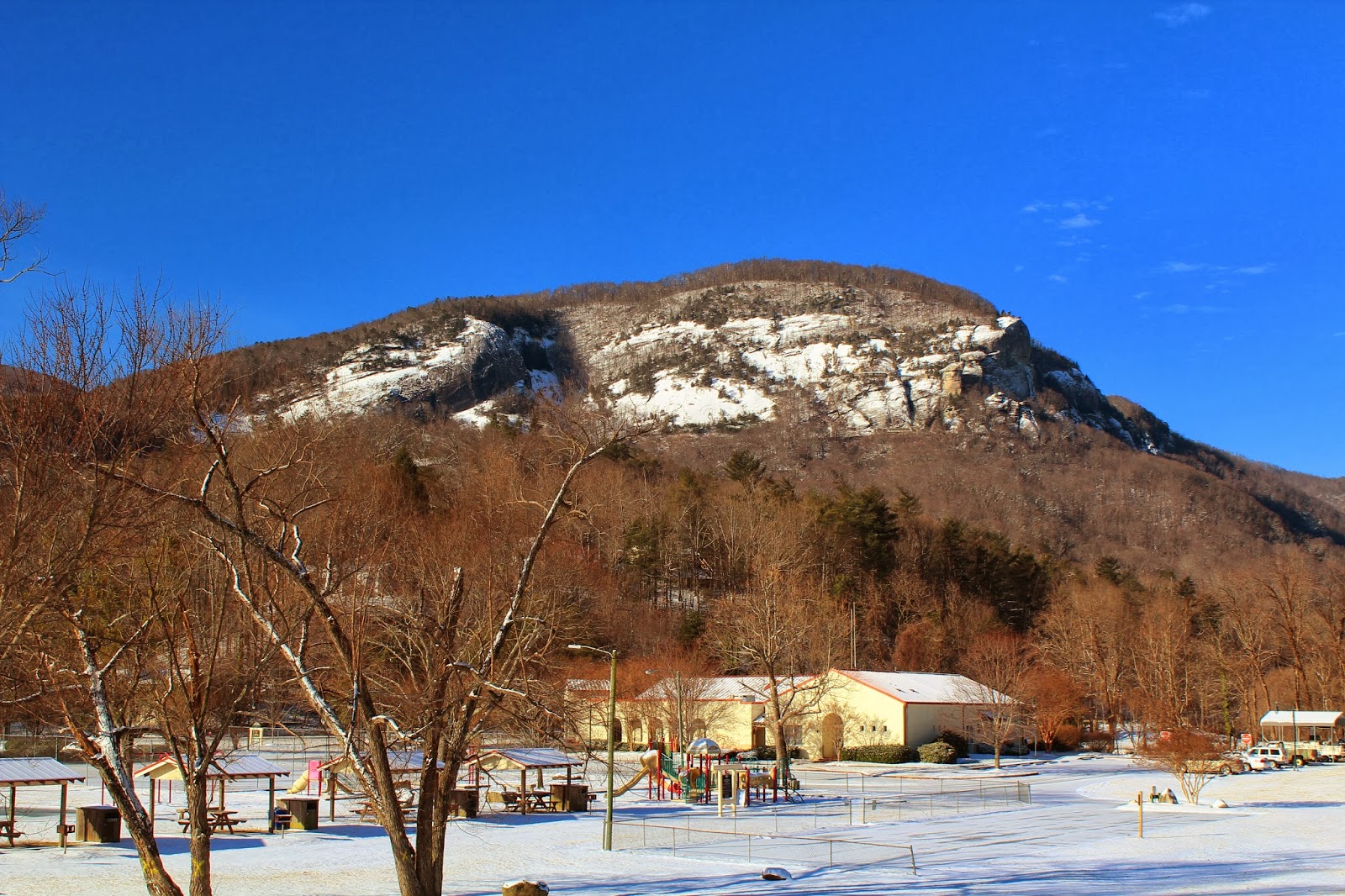 Since the Town has been working on Buffalo Creek Park, I thought that I probably ought to get some winter time shots over there too.  I was tempted to hike the whole 3.5 miles, but the temperature was in the teens and I wasn't exactly bundled up for those kind of temperatures, nor did I have other appropriate trail gear for snow trekking.  I still was able to come away with some good shots.  I was also reminded while I was there that one of the reasons I like snow is because I get to see wildlife activity.  When I first got to where I would get my first shots, I noticed some tracks I had never seen before and it took me a while to figure out exactly what they were.  I also found fresh scat which looked odd.  After studying the tracks for a while, I concluded that maybe it was river otter tracks which was confirmed after returning to my office and doing a little research.  I wish now that I had taken a picture of the tracks and the slide marks.  It was obviously a pair as there were two sets.  They must have been having a playful romp in the snow as I have read is common with otters.  I also saw some tracks from the elusive bobcat.
Here are some of the shots I was able to get from the trail and along Buffalo Creek. 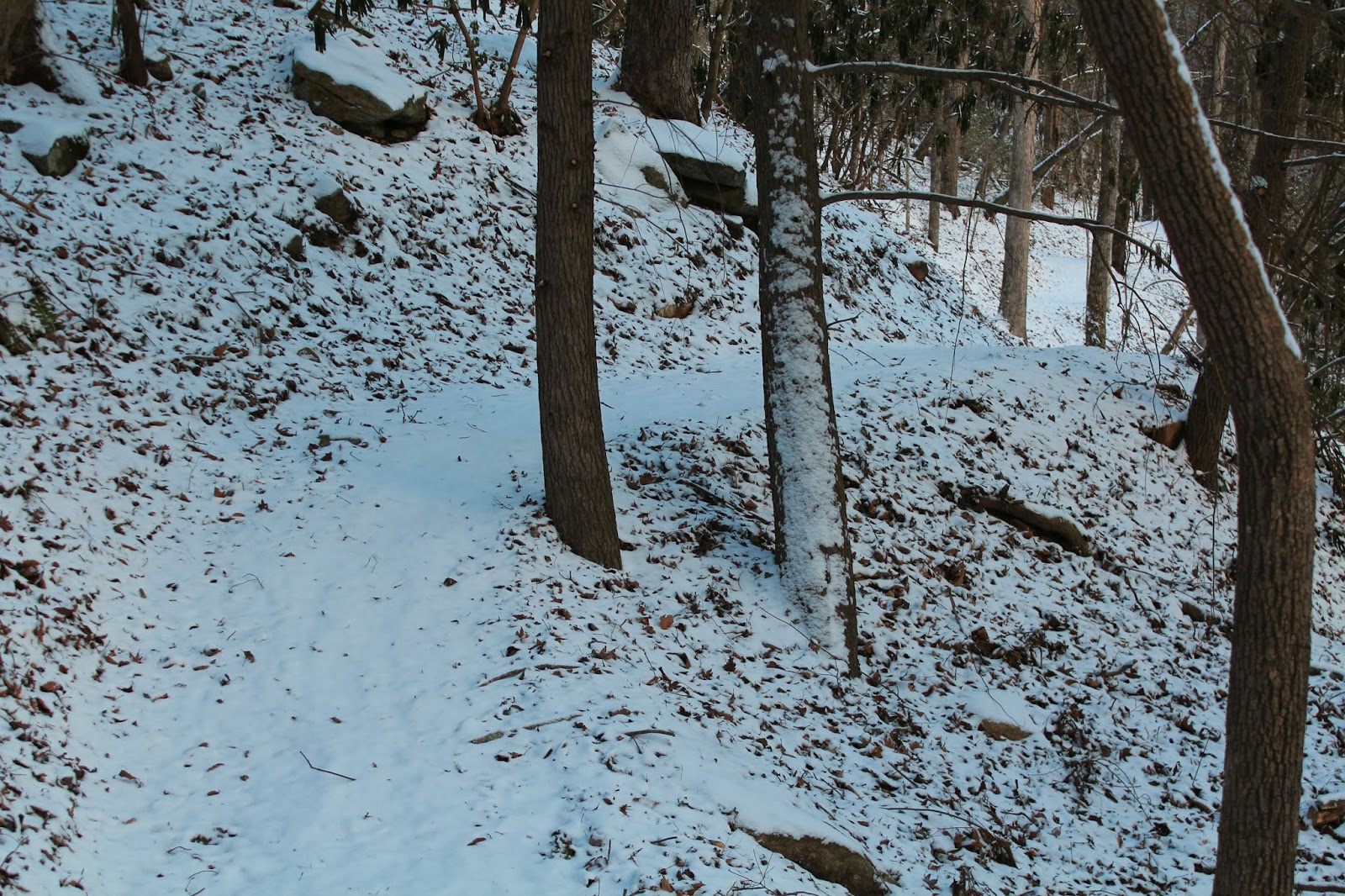 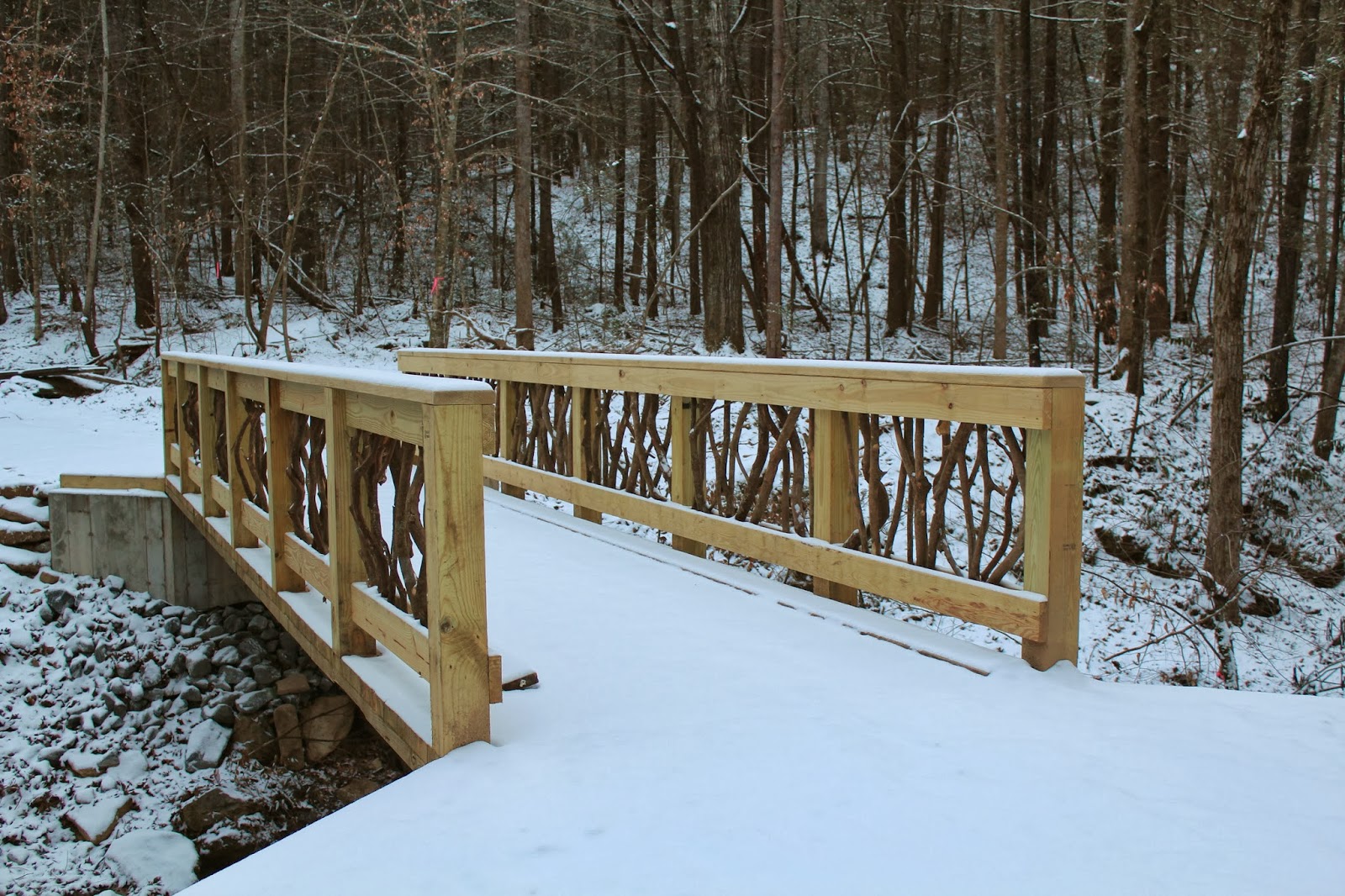 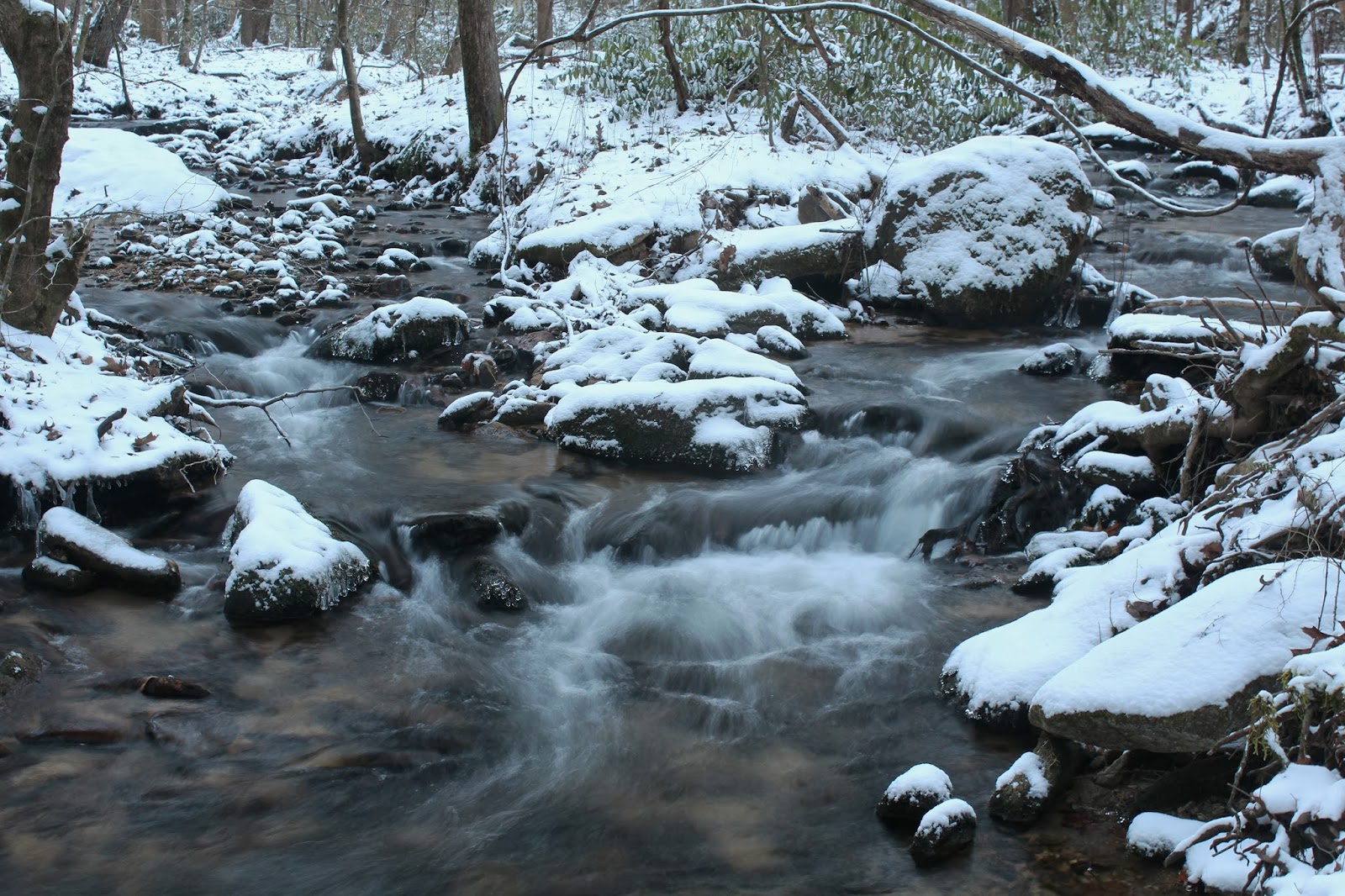 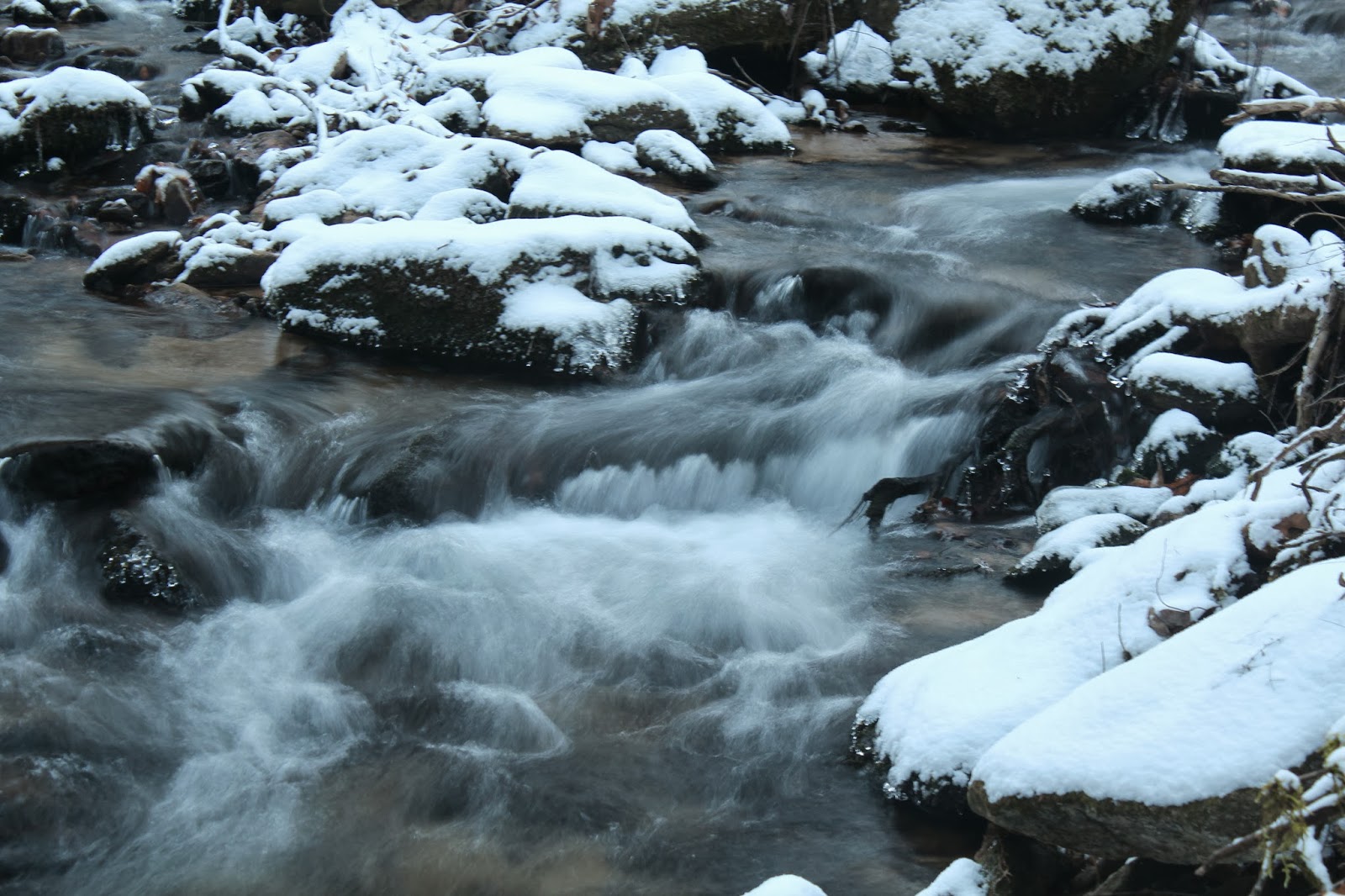 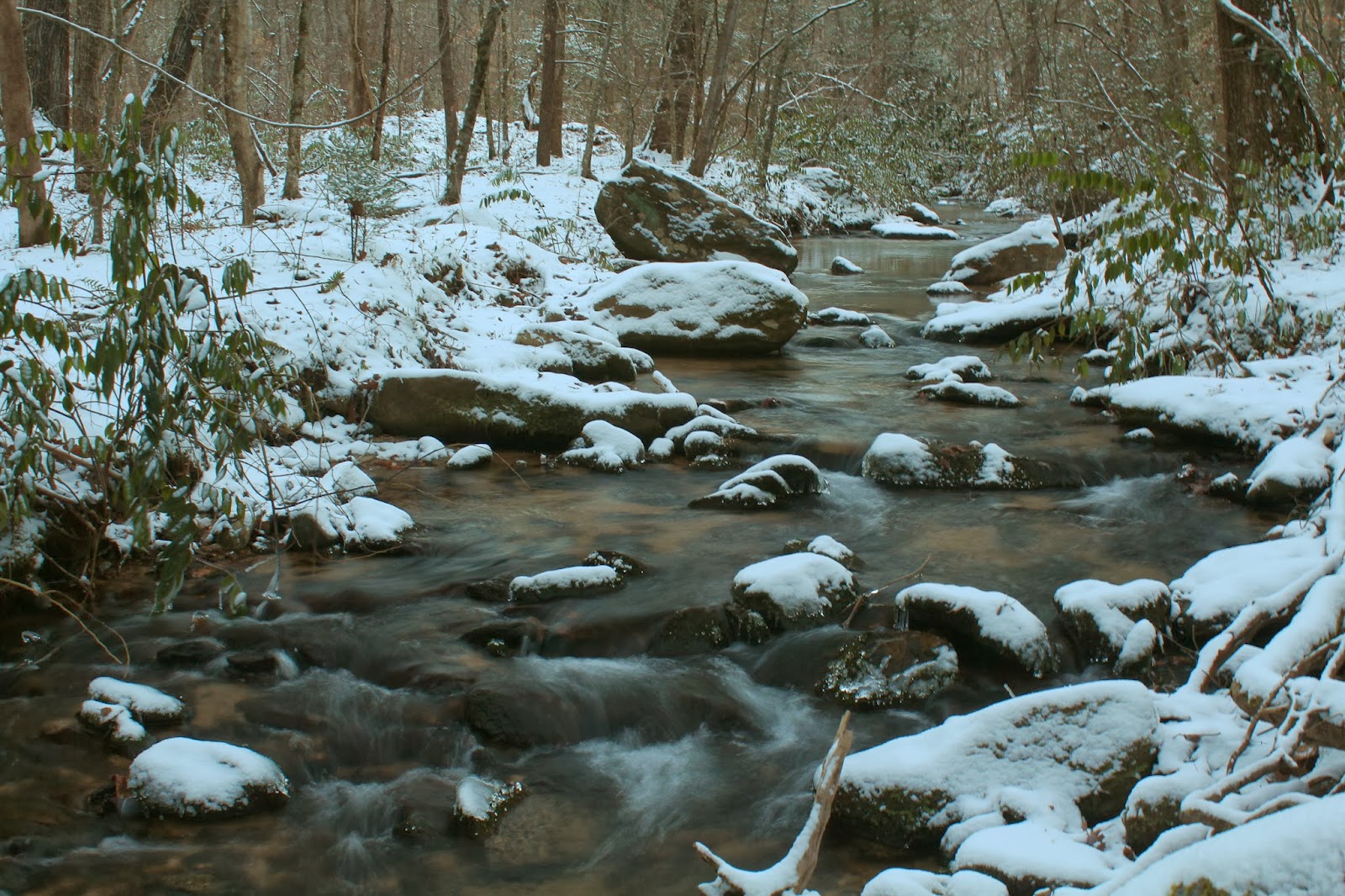 I love being in the woods in the snow.  I love the quietness and the feel of isolation from the world outside of the forest.  Snow is what I call an equalizer because it hides the impacts we as humans create as we develop roads, paths, and parking lots.  For just a little while snow hides the ugliness of man's creation and exposes the beauty and simplicity of God's creation.